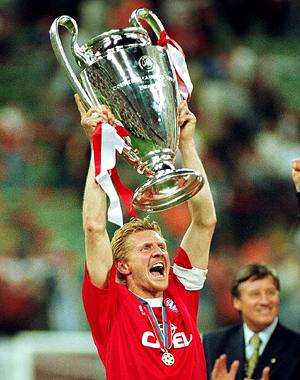 Spoiler: show
The name Stefan Effenberg is synonymous with one of the most glorious periods in the club's history as this natural leader strode the international stage.
a natural-born leader if ever there was one, possessed an extraordinary ability to drive and inspire his team-mates in the most tense and challenging circumstances. 'Effe' soon earned the nickname 'Cheffe', an endearing term for the Big Boss.

He arrived at Bayern from Borussia Mönchengladbach in 1990 aged just 22, but his first spell in Bavaria ended without honours and he moved on after two seasons. His return in 1998 coincided with a period of success in which he was to play a starring role.

Coach Ottmar Hitzfeld had made Effenberg one of his priority targets and put complete faith in the number 11 from the very first day. The player repaid that trust with outstanding performances and a superb track record, including the Bundesliga title in 1999, 2000 and 2001 and the German Cup in 2000. His career at Bayern reached a climax with the Champions League trophy in 2001 and the World Club Cup the following autumn.

Hitzfeld never made a secret of his admiration for the on-field boss. "Stefan Effenberg leads this team, many of my players come to life when he's around. He goes up to his team-mates and instil confidence. When others are looking for a hiding place, that's when Effenberg steps forward," the coach enthused.

"Stefan has been outstanding in the four seasons he's spent with us, it's been one of the most successful periods in Bayern's history, and a lot of it is down to him," President Franz Beckenbauer said as he bade farewell to the team captain. Hitzfeld echoed the Kaiser's comments: "Stefan is a marvellous player who's had a huge role in Bayern winning so many honours."

Alas, there was to be no fourth domestic title in a row by way of a leaving present, and injury kept the midfielder below peak form in the last few months of his Munich career, "which was very unfortunate," new captain Oliver Kahn commented.

"He's had a worthy send-off from the fans, and he's deserved it," general manager Uli Hoeneß commented, "he's been a huge figure at Bayern over the last few years, and much of what we've achieved together is down to him, so I'm extremely grateful to him for that."

And what did the 'Boss' have to say? "I've had four wonderful seasons," he agreed, "everything, the whole A-Z, worked together perfectly."

Nice stats, I'd only increase FKA by 2-3

updated the FK's then

Effenberg: This is Sparta!

Kahn: You idiot! This is Deutschland!!!

Btw., thanks for these nice stats.
Top

i'd put those two in my signature if i had the space
"You do ill if you praise, and still worse if you reprove in a matter you do not understand." - Da Vinci
Top

i unlocked effenberg from pesshop just now (been starting a new option file) and i was surprised to find how similar my stats were to the default ones, considering i did effenberg from scratch (i didn't remember him being in PES2009 already), i even edited some non-affiliated player to be him. But one thing that surprised me was the default FK's being so high so i'm wondering if maybe i got that wrong.

so anyone thinks his FK's should go up?
"You do ill if you praise, and still worse if you reprove in a matter you do not understand." - Da Vinci
Top

I really think that he should >80 Free Kick (100% sure) and maybe >80 on Curling (60%) (default Free Kick stats are maybe a little higher from his actual stats). I can remember a few of his free kicks from a solid distance (although I can't find any video). Let's wait could somebody else confirm this.

Sorry for not saying this earlier, but I've overlooked that parameter because when I saw that most of characteristic parameters are all right, I switch to auto-pilot and just insert the stats

I remember one free kick from him. Semi final Champions League away game against Dinamo Kiev (with Sheva there).

On the right side of the box, he fakes he is going to center (since he is right foot) and the barrier is put against a left foot set-piece taker. The only way to score it with the right foot would have to be a bombshell r-carlos trype.

But Effemberg hit that to the right side side of tha barrier, having to put a curl ball (the ball does an arch in the air, getting around the barrier and scoring a true amazing goal).

This to point out that he had intention on it, as well as to portray his ability to set-pieces.

So, i would suggest 87/89 for Free Kick/Swerve as he was a specilist.
When the seagulls follow the trawler, it is because they think sardines will be thrown into the sea. Eric Cantona
Top

i need to check that, i'm almost sure it was michael tarnat, not effenberg, who scored that goal. if you have the video, tarnat's number is 18 so please check if it was him or effenberg
"You do ill if you praise, and still worse if you reprove in a matter you do not understand." - Da Vinci
Top

PS - i found the game and the scorers, the problem is both tarnat and effenberg scored and i couln't find out who scored the FK

Bayern went on to win in the second leg 0-1 (goal by basler i think) and moved on to the final where they lost 2-1 to manchester, after dominating the entire game and manchester scoring both goals in stoppage time, with goals by basler (bayern) and sheringham and soljskaer (both substitutes) scoring for manchester
"You do ill if you praise, and still worse if you reprove in a matter you do not understand." - Da Vinci
Top

finally found that goal. it was indeed effenberg who scored it, sorry for not trusting what you said

and, btw, here's the goal i thought you were talking about:

edited FK/swerve then, according to your sugestions
"You do ill if you praise, and still worse if you reprove in a matter you do not understand." - Da Vinci
Top

it is better from what I remembered...
When the seagulls follow the trawler, it is because they think sardines will be thrown into the sea. Eric Cantona
Top

Classical wrote:it is better from what I remembered...

what do you mean?
"You do ill if you praise, and still worse if you reprove in a matter you do not understand." - Da Vinci
Top

sorry, just a comment for the goal itself, not the stats. the goal is even better than the impression of it which I had on my mind.

messy sunday afternoon english
When the seagulls follow the trawler, it is because they think sardines will be thrown into the sea. Eric Cantona
Top

reduced speed stats a bit after seeing some more games
"You do ill if you praise, and still worse if you reprove in a matter you do not understand." - Da Vinci
Top

I think MENT can even be higher: 95. Only Kahn had the same "never die" attitude the last 15 years in Germany. He was fu..in' arrogant. Either you loved him (=Bayern supporter) or hated him. In important matches against e.g. CL-opponents he picked the best player of them and tried to demoralize by hard. He was the man under boys

. Though he is not the most intelligent one... A policeman he called "Asshole" and later he had to pay EUR 10.000 because of that

His ment can definitely get higher. He was the definition of a leader!

s-cobar wrote:His ment can definitely get higher. He was the definition of a leader!

But his TS and ACC can be dcrease. He needs a lot of time to get his top speed. And we cant say top speed cause he`s slow as a snail!

I also plead in increasing his TW stat. Though he is quite stupid in interviews

he really understood the game, made the right decisions.
Top