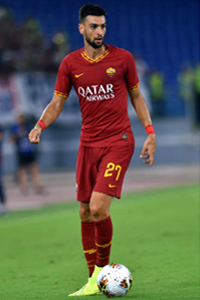 Good Stats, It's a young talent, I liked her game.
Top

Thanks for making him....I was going to request

"Modern football is in many ways more of an athletic game rather than a technical one and the rise of a classic "number 10" is exciting for both Argentina and the global football community at large.

At the age of just 19, Javier Pastore is becoming one of the most important youngsters in Argentinean football following some excellent performances for Club Atletico Huracan.

This attacking midfielder, with just one year of experience in the Argentinean Primera Division is being scouted by the elite of European clubs including Manchester United, Arsenal, AC Milan and Juventus. But it seems that his agent, Marcelo Simonian, is fully aware of his client’s burgeoning talents.

Earlier this year, Pastore´s agent rejected an offer from Manchester United for €10 million because the player wants to go to a team when he has the chance to play and improve his level.

Pastore was born in Cordoba, Argentina, in June 1989. Initially he played for Talleres de Cordoba youth team, a club that is in the second division and fighting to avoid relegation. In January 2007 he was sent on loan to Huracan until June 2009 when his contract also expires at Talleres.

The young playmaker has become a major star in Argentina with calls for national team coach Diego Maradona to pick Pastore, especially as Roman Riquelme no longer plays for the South American heavyweights.

In January, Javier was called to play in the Sudamericano tournament for the Under-20 national team, but Huracan wouldn’t release him to ensure he had a pre-season with his team mates. Maradona hasn’t forgotten this refusal.

Pastore is a different player, from those that are abundant in modern football. He is a creative and stylish playmaker. He is capable of playing off the striker in a typical number 10 role, or on either flank. But he doesn’t only provide assists and spread the ball well; he also scores goals thanks to his brilliant long-range shooting.

Although it is early days in his career, Pastore does not have any glaring weaknesses, but because of his age he is inconsistent. When Pastore plays poorly it affects the team who are reliant on his excellent attacking link-up play. Another weakness is his aerial game, which is something that he has to improve upon.

During the second-half of the Argentinean season, Pastore has received a lot of praise from fans, pundits and football professionals alike. His interplay with team mates Matias De Federico and Mario Bolatti, have ensured Huracan are unlikely title challengers in the Clausura.

At the time of writing, Pastore is one of the top goal scorers in the Clausura, with seven goals (and two assists) in 15 matches. Due to his fine performances this season, it seems Pastore’s days in Argentina are numbered.

Two days after his re-election as Huracan president, Carlos Babington has announced he is determined to keep Pastore at the club for another season. Reports suggest he has come to an agreement with the player’s owners whereby 10% of Pastore’s ownership will be owned by Huracan and if Pastore does move on soon, he may be loaned back for a short period.

Moves are in place behind the scenes for Pastore’s big move, judging by his displays so far, he could be a major star for Argentina (if Maradona picks him) and at some of the biggest clubs in Europe."

Below are player ratings of Javier Pastore based on the opinion of local football experts and decided in comparison with the quality of the Argentinean league.

I don't watch Pastore but Is he a feather

Wow technique 87? Have a check at the Serie A and EPL ladders, he does look very high, especially for a 20 year old!
"If you are first you are first. If you are second, you are nothing" - Bill Shankly.
"I guarantee fourth place" - Rafael Benitez.
Top

Vandeach wrote:Wow technique 87? Have a check at the Serie A and EPL ladders, he does look very high, especially for a 20 year old!

This is what I was saying, be careful with a guy who has 20 years... When I did I gave it 84 in technique. I put it to 85 now
Orgullo, Pasión y Gloria
Top

He didn't have the chance to play very well... the field was in very bad shape (because of the rain and the ''pedrada'' xD)

TW should be higher, he understarnd very well with his team mates and has a very good vision of the game

I know that he sometimes is selfish, but he has *dibbling and *tactical dribbling, so to put a high TW value would not be wrong

Has he not moved to Palermo yet?
Top

He wears No.6 in Palermo

very impressive debut vs Napoli. Passing, technique, composure on the ball, pace and creativity.
Gotta change my shirt, it's sticking to me. I'm sweatin' like a cunt. Don Logan
Top

noticed that too, seems quite a crack mainly for the ease on performing all that..
]The Italian Corner on PSD[ http://pesstatsdatabase.com/off-topic-chit-chat/italians-do-it-better-a-k-a-the-italian-corner-t12414.html
Top

You must have xvid right.....cause I couldn't get that match

Glad he looked good though

Gives credibility to the young Argentine players out there. Keep it going kid!!
"The Recoba Effect"
Top

i am not very familiar with this player,so i just ask for a feedback about his 6 consistency,i mean,jovetic is around here from a year now and counting that in his championship was a star currently he's on a 5 consistency...is pastore's rating accurate? thanks

btw,i think he could grow up a lot this year seems talented....
Saving Private Adrian something in him remind me the "first Kaka".....
Top

zuo wrote:i am not very familiar with this player,so i just ask for a feedback about his 6 consistency,i mean,jovetic is around here from a year now and counting that in his championship was a star currently he's on a 5 consistency...is pastore's rating accurate? thanks

well, Jovetic could go 4 in consistency imo, just look @ how bad played Saturday, and how good played Wednesday vs Benfica.. lol poor guy, so gifted so discontinuous.. anyway about Pastore the only thing is to wait and see

i'm not judging only 1 serie A match, i've seen him the hole season in argentina, and he hasn't have the proper update before moving. jmg you know that, you are just being a dick again. his constancy is alright IMO. it can be change pending how he do now in serie A
Top

drgenmad wrote:i'm not judging only 1 serie A match, i've seen him the hole season in argentina, and he hasn't have the proper update before moving. jmg you know that, you are just being a dick again. his constancy is alright IMO. it can be change pending how he do now in serie A

jmg721 wrote:Yes, after 1 serie A match we are now all sold he is 1 pt below Miccoli

I didn't see you pushing for 87 tech over the past 2 months. But after 1 match you really expected us to move him up? You'd need to convince Lucas or Messias who are Argentine league watchers. And Messias18 was the one who settled on 85.

BTW I saw him in the 2nd match vs Fiorentina, and his passing was actually really poor. I can tell he has the creative mind, but his accuracy was really off, and not communicating well with his teammates. But, I'm not going to make any suggestions yet as he will need time to adjust to the league.
"The Recoba Effect"
Top
Post Reply
366 posts