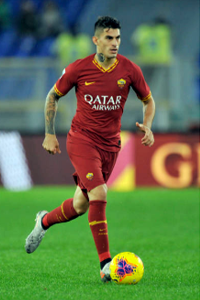 Yes, he is playing this season on the first team. He will continue there for his incredible rendiment.
Sevilla has a really good wings for his speed and technique, but so weak.
Editing La Liga...
Top

Please update. He plays also on the left side.
Top

I agree on side:B.
Top

vs Unirea urziceni he got subbed in for Capel and also played on the left side.
I'm against you
Top

Changed Side to Both.

Isn't he more winger than side midfielder?
and what do you think about his BB..he seems pretty strong.. IMO 75-76 is fair.I'm also thinking about his attack..he is showing good offensive playing this season..I would give him 75 ATK.
I don't live in Venezuela, but Venezuela lives in me
Descansa en paz, Roberto
Te echaré de menos
Top

Did anyone saw the real madrid game last night?Where did this guy come from?i think you need new sets for stats for this guy,he made sergio ramos work his boot of

soccerkits wrote:Did anyone saw the real madrid game last night?Where did this guy come from?i think you need new sets for stats for this guy,he made sergio ramos work his boot of

He became from Sevilla youth team, he arrive there from the Club Deportivo Morón

nice thanks for the info

I'm really not content with the thread being locked, I can see a number of inaccuracies within the set. The low Stamina and Response, the Long Passing values, the Curling value and the inclusion of the Side star are just a few things that are really quite wrong. I'm opening the thread back up
Top

What i think about Perotti:

Attack:75 He is not so good in attack but has good arrive to the area thanks to his aggression but 74 is just underrated.

Stamina:82..Although he runs all the time but this guy doesn't feel tired.He ended the matches well and shows good performance in the last third.

Acceleration:88-89..really explosive.he is very fast in sprints.or if u want to balance raise his TS.But I find his major speed is in short distance.

Response:79..he is young but has good reading of the game.. well-timed passes.for me he is on par with Capel or Jefferson.

Dribble Accuracy:85-86!!These are crazy numbers for such a kid..but I am very impressed of his good controls.I dunno but I find his way of dribbling is just special and amazing..he takes short steps and then long ones but the ball is still at the same distance(that's if there was a distance

)..he looks like jogging but the ball is always very close to his foot.My exceptations is this guy can gets 90s DA in the future.Anyway Mauro Zarate has 88DA while he is only 22 and Messi has 96(Of course I am not comparing him to messi

). Please guys awake me cuz maybe I am just overtaken with this miracelous guy

Dribble speed:88 really fast with ball and doesn't loose much speed .I don't find Bojan is over him in this area.

SPA:76/SPS 77..strong rather than accurate short passes but still has good accuracy.

LPA:79 LPS:78 one of his good aspects.very nice crosses with great accuracy.He regulary supplies strikers with fine crosses. i think he should be very close to Pedro Leon.

SA:74 he has good shots on the goal but still has many time to develop here.

SP:80 has some "banging" long-distant shots.

ST:75 has some nice shots from difficult angles..he scored a nice goal in the league showing good ST.

Mentality:76 sometimes he tracks back to assist in defence and works hard for the team.I don't understand why Lautaro Acosta has 77 while Perotti is setted on 74.

Teamwork:77.good connections and understanding with his mates..I know 2 points under Navas seems overrated..but I suggest a raise in Navas's TW long time ago.

I am excited to hear from u,guys

WFA and WFF up to at least 7 please he can use both his legs easily, but he's known for that, altough he prefers to dribble with his right...yeah fine, I think that value is ok

10th will be on Santiago Bernabéu...
Top

this guy was a monster vs Unirea Urziceni when he came on.

Granted, Unirea was quite tired and he was fresh and motivated but I don't remember someone getting past 2-3 players as easily as he did. Absolutely impeccable showcase of him there.
I'm against you
Top

PMC wrote:this guy was a monster vs Unirea Urziceni when he came on.

Granted, Unirea was quite tired and he was fresh and motivated but I don't remember someone getting past 2-3 players as easily as he did. Absolutely impeccable showcase of him there.

He is the new phenomenon in La Liga with special and faboluos way of dribbling. can imagine him the best player in the world after few years.No wonder that Real want to join him.
I don't live in Venezuela, but Venezuela lives in me
Descansa en paz, Roberto
Te echaré de menos
Top

I saw this guy last saturday here in Tenerife, he is a f... small demon xD He got our defenses crazy...
Top

So guys what do u think about the set I suggested above?
I don't live in Venezuela, but Venezuela lives in me
Descansa en paz, Roberto
Te echaré de menos
Top
Post Reply
101 posts