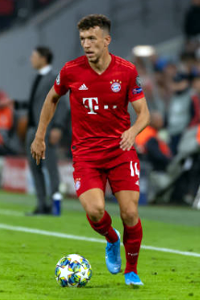 He signed with Club Brugge
Top

Needs to be moved to his respective club since it was created.
Top

Can anyone update him? His main position is SS and he's better in header and jump, something like 83, 82.
MocaBG: "I am the only one here that is folowing our football and who knows to rate players corectly!" LOL
Top

I made this set almost entirely comparing him with Mandzukic. So let's start from the beginning.

I have him as a AMF because in every source I found they list him as a midfielder, BUT I rated him in stats as a SS because I think it suits him the most.
His positioning during set pieces is quite awesome, combined with his height and header, he often scores beatiful goals.
Decreased his defence because I don't see him that better then Mandzukic.
Raised his balance because he's quite strong, and I changed his height and weight to official sources.
If he was still 180/74 it could have been 82 max, but with this current values, he doesn't need it.
Didn't changed stamina because this value is quite good compared to Mandzukic.
Swapped TS and ACC and lowered by one point. He's fast, and combined with his height he can outrun/outmuscle smaller players.
Increased his response as he clearly improved here, often arrives in the area in the right time to score a sitter.
His agility could be higher, but S-cobar rated Mandzukic on 81, so I don't think he should be on pair/better.
In dribbling in this current set he's way underrated, he can dribble good, doesn't use any tricks, but instead he beats his opponents by "Messi-movement" (when he does the left-right dribble, can't really explain it, you just have to see it).
In passing he was also underrated, when he's on the side, he often crosses and assists for the goal.
Currently he's Brugge's top scorer, his goals aren't anything fascinating, but always precise, also he scores time-to-time some volleys.
In free kicks, he also shows decent accuracy and a nice swerve.
Now we come to his biggest asset, header & jump. It's quite amazing how sometimes he lifts himself up in the air and strucks the ball.
As I mentioned before, with his height and positioning, he's fearful in set pieces.
You can see his technique when he strikes volleys, too bad he isn't more consistent.
In mentality and teamwork he's similiar to Mandzukic, but Mandzukic helps defence more and chases back.
I removed 1-touch play because with current shooting values he doesn't need it, and he isn't really that good in that to deserve 1-touch play.
MocaBG: "I am the only one here that is folowing our football and who knows to rate players corectly!" LOL
Top

More or less agree on everything. Updated.
Top

move him to BVB

He scored a nice goal

@ominho - No, he can play on both sides equally good.

Yeah. It was my impression after watching some youtube-vids of him and he seems able to confirm that: His positioning and timing for headers is incredibly sharp. Eye catching.

If he will show that consistently, his header and jump values deserve many additional points. I'm very excited about his season.
PES-Up
Top

His heading is really incredible. Though he didn't play much until now, I honestly think that his heading is the best of all attacking players in the Buli.

I would give him Header 88, Jump 84 for now. And I'm pretty sure he will show that he deserves even more.
PES-Up
Top

only 3 points gap under Falcao is a bit strange, don't you think?
Top

I think his goal was more a lucky one, he will never score such a goal again in his life.
Top

monKevski wrote:I think his goal was more a lucky one, he will never score such a goal again in his life.

If he can do that with his left (weaker) foot, just wait and see what he can do with his right.

And for third time, Weight: 80 kg.
MocaBG: "I am the only one here that is folowing our football and who knows to rate players corectly!" LOL
Top

WFA and WFF can be 7. You can have a hard time to tell which is his strong foot.


Acc can get a serious raise. He uses one move quite often: He does a short scissor dribbling in front of his opponent and then he just pushs the ball and trys to outpace the opponent with the first steps. He's quite succesful by doing this. (Look at his Bremen goal.) Overall he doesn't look outstanding fast though.

As he tends to do hard goals, I would put one point from SA to ST.

Crossing is very low for him, I consider him to be the best crosser in Dortmunds squad. He also showed very very decent cross balls from his side to other flank. His long balls are accurate but first of all he puts a very sharp speed in it.

i agree with your suggestion and isn´t his main position at Dortmund LMF? and he can also play as CMF as i know.
Top

He is used as LMF, yes. But that's first of all due to Kagawa and Götze who are perfect AMFs, it does not necessarily mean that Perisic isn't more naturally an AMF too. I don't know, I feel like he's a guy who doesn't have a real main position, he fits for all offensive positions. He is an extremly versatile player in my eyes.

I did also hear that he is capable of playing CMF, but I think he won't do for Dortmund. It doesnt perfectly suits him, because he can't use his great skills in the final third as much. His dribbling, shooting, crossing, heading, that's much more useful when he plays an offensive position.
PES-Up
Top
Post Reply
122 posts