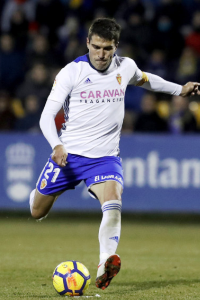 He recently plays as a right back.
Since his performances as a DM were very poor for the last 2 years....

The Manager started using him as a right back.
Top

Updated and sold to Genoa.

of course. Genoa is making a strong team and this is another good buy for them
Top

74 for free kick???
the one against Roma was of a player who have almost 82
'menu ve cade na saietta susu...
Top

could be a lucky one, but Mr Gasperini said that he will be Genoa's 1st FK taker for this Season.. btw something to keep an eye on! i also seen that his BB could go a couple of point up, but it's just the first impression.. and also that he's a box-to-box player, going up and down allover the field
]The Italian Corner on PSD[ http://pesstatsdatabase.com/off-topic-chit-chat/italians-do-it-better-a-k-a-the-italian-corner-t12414.html
Top

who says spaniards are doomed to fail in serie A

Good debut for Zapater, I hadn't realized he was still so young. His passes were well placed, paced and aimed, a lot them into offensive positions. I could see SPS @ 82 and LPA @ 84, but I will wait a while longer. Like last season, Genoa are certainly the team to watch in serie A.
Gotta change my shirt, it's sticking to me. I'm sweatin' like a cunt. Don Logan
Top

Rfuna wrote:Like last season, Genoa are certainly the team to watch in serie A.

He never showed an average power on his shots on his Zaragoza's times. And his lasts two seasons he was incredible bad and with a low compromise. You will see, if he wants now, that he is so much better than his stats suggests.
Editing La Liga...
Top

TW will have to go up at some point, he's the new focal point of the team
Gotta change my shirt, it's sticking to me. I'm sweatin' like a cunt. Don Logan
Top

oh yes, interesting that his FKA was at 74..
]The Italian Corner on PSD[ http://pesstatsdatabase.com/off-topic-chit-chat/italians-do-it-better-a-k-a-the-italian-corner-t12414.html
Top

FKA should be raised at least to 80... He is very confident on finding the goal, 2 goals already in few games...
Top

TW will have to go up at some point, he's the new focal point of the team

From what I've seen these are very good suggestions