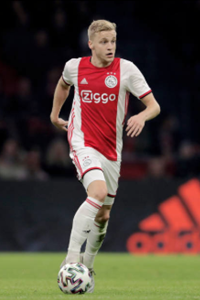 His attack can be lowered to 78.. I think it's to high for now, Ziyech is on 78(although I think he has to be much higher around 81/82) and it cannot be that van de beek sits 2 points higher than him.
Top

His attack can be lowered to 78.. I think it's to high for now, Ziyech is on 78(although I think he has to be much higher around 81/82) and it cannot be that van de beek sits 2 points higher than him.

I don't think Ziyech should be yellow. And imo Donny is more dangerous and a far better player posistion wise up front. Imo no doubt about it. Ziyech plays in attack i wouldnt consider it highly intelligent. Ofcourse he is talented and makes up for it by doing something brilliant occasionally (last season he was better, this season he is ok). But its mainly because he has a descent vision and literally tries to pass a through ball EVERY TIME. One must be good if you try it 20 or more times in a game. Donny is far more effective with his running in channels, posistion and simple fact: decision making. No for me, this comment would make sense if you let Ziyech out of it. But considering Ziyech 81/82 and Donny a 78 is poort judgement imo.
Sporting Clube de Portugal meu amor / Working on new sets and updating Liga Sagres
Top

Ziyech is just not the type of player that positions him in front of the goal or makes runs behind the defence. But the fact is that he makes a mark in almost every game by giving an assist or scoring a goal. But let us not discuss Ziyech( I am interested in your opinion on the Ziyech stats) in the Van de Beek forum.

Van de Beek is a good player no doubt. And he has multiple weapons to be dangerous on the pitch. But I personally do not think he deserves 80 attack yet. But maybe i'm just too harsh on him, because I don't want to overrate young players.
Top

The movement behind the attack, and those passes.
Top

His touch and his passing...way way way too low.
Top

He is an am/cm, so I don't know if the card is effective in the game. I think it only effects the positions CF and SS.
The card Free Roaming is definetly what he needs. That is his playing style, he always looks for gaps between the central defenders or beteween central defenders and backs to run for a pass.
Top

Donny gave a class of "modern football" in the middle of the Champions League semifinal, maybe because the movements without the ball stand out in the eye of the spectator less than necessary, or because in Ajax there are too many bright young people, until today, he had not had the necessary recognition he truly deserves.

an all-terrain player, his intelligent movements around the opposition box are one of the keys to the dutch fluid attack. he has a sense of location difficult for the defender to intercept, as it is always active in the search for spaces between rival lines. either to finish chances, serve as support or link up the play from the backline or be the driver of the attack. he is a connector. De Jong would lose a little power without him, Ziyech and Neres, too. It connects the chaotic but beautiful attack of Ajax.

an enormous fact that graphs his silent influence: he was one of the players who least touched the ball throughout the game.

if you want to ask yourself in a quick first observation what position each player occupies may not have a simple answer, this team presents a different way of looking at football: not from their positions but from their functions.

in this way, it is usual to see van de Beek fulfilling different roles throughout the field. it is not modern or old, it is simpler: occupy spaces at the right time, with rotations and supports. some enter, others leave and, at times, the rival does not know how to apply their marks. it makes the opposition wonder, who is the center forward? and the wingers? and even at times, who is the midfielder.

it would be very interesting to see Donny van de Beek in a team of Guardiola as someone who interprets spaces and times very well.
Top

And Stamina should go up.
Top

Surely he is more dangerous than 78 for attack? 80~81 seems more suitable to me
Top