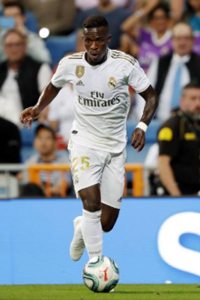 Its main feature for creating offensive moves is its explosion and associated speed. Much of its offensive potential comes from this speed and from its air passes (more specifically, the crossings).
About this, the air passes are better than the land passes. But, although he does play good game openings here and there, he also misses many passes for daring moves in inadequate spaces. Another problem is the speed of the passes that is very slow and, in a way, can facilitate interceptions.

For this set, I analyzed as a matter of priority what he did in matches by the professional. For this reason, some people may find that he is underestimated in shoting skills and even passing. But, honestly, he has not shown anything beyond that so far in games by Brasileirão.
Many of the expectations that people create come from his hiring for Real Madrid. He's good, as I said, but maybe people are getting too high.

Below I will leave video material of some of the twelve matches that he has accomplished so far:

I watched some compilations of him, was curious about how good he actually is and wanted to see if the hype was at least mildly justified.

Well Vinnicius (see what I did there, hehehe) does have potential. Nowadays he looks like a rough diamond with some interesting (yet unpolished) skills and a lot of underdeveloped things that will need years of polishing if he truly wants to shine at the highest level.

Considering his already decent technical skills and his speed, and the dismal opposition he sometimes faces (those defenders, seriously, ugh) he struggles a lot to create end product, and to turn his attacking runs into clear goal chances. I believe this is already well represented in the low attack value, but honestly I think it could go even lower, around the 65 mark. Even if it's just to reinforce how much he has to improve in terms of decision making.

He looked decently strong to me, though? Not a bulldozer but he has enough body strenght to withstand pressure to a degree. Nothing crazy but I would see no issue into low greens BB.

His Acc is pretty brutal, potentially higher than this, 89 is not a bad value though, probably fine for the moment.

His DS however, I struggle to see him showing it to such a degree. His dribbling is mostly trickery, making use of a few tricks he's really mastered and then his great acc. Don't know him enough to judge, but I've barely seen runs on the ball where he maintains a constant, high speed. Won't comment on it further as I lack enough knowledge here.

In terms of passing he's quite promising, although very unpolished at the moment, so nothing to say regarding his stats.

Lastly, I understand why Speed Merchant was given, because there are a few moments where he shows quite crazy agility, while most of the time he's well rated at mid yellows. But that card is so overpowered, there's a good reason we've pretty much banned it from the database.

Pretty much agree with everything you said @Korinov.

I thought I commented about him but it seems I forgot. I had the possibility of being in the stadium in the final vs my team. The hype around this guy was just insane in my eyes...then we realized he was sub, we all say wtf? These were the two more important matches he participated so far? And he didn't play. When press said he's worth like 50 million I couldn't believe it, specially considering you expect him being like the star of the team. I wasn't impressed at all with him, if you go to the comments in the second video I leave in here, all say Barco is x10 more than him, and eventhough they're not the same kind of players, that's very true, at least so far.

You've got a point about his turns and his agility, probably the aspects of his game I do like the most. But he should work a lot at his decision making and mainly at his movements to be prolific at a higher level.

Thanks for these, hadn't seen them. Refreshed my mind regarding something I had forgot to say, how one-footed he is (when forced to, he will resort to his left foot if there's no other way out, but with almost laughable results lol).

And yeah he's quite strong. 76 at least IMO.

Edit: also worth mentioning, he's at least willing to release the ball and try a through pass/cross when he sees a good chance for it. It usually leads to nowhere because, specially regarding ground passes, his skill is far from being good enough to pull it through, but the fact that he's trying is important, and if he puts effort and training into it, it can propel his game to an entire new dimension. I'm not checking him out lately at Real B but I really hope that he is doing justice to this update xD
So many young prospects for the Brazil NT next years, hoping that some defenders come up as well.
Go VJR o/
Top

This is crazy, who is the ignorant who put that? I thought that here they knew football.
Top

We need to update him.... He has improved greatly over the last months.... Dribble, shot power,accuracy,passing
Top

Calm down, i still think this set still kinda represent him nicely, maybe att boost may be needed since he creates a lot of danger, but I'd give him a few more games before doing anything drastic
Top

He ain't even proving any of those from what I've seen. He remains electric and surely is a player who can carry the ball forward, but his end product leaves a lot to be desired. Awful shooting, his passing doesnt seem that bad but surely not timely. Very average there, which is only normal, but I can't see him winning RM points with his current skillset. In any case, he does look willing to improve, which is good. Current set looks excellent.

furymaker wrote:Calm down, i still think this set still kinda represent him nicely, maybe att boost may be needed since he creates a lot of danger, but I'd give him a few more games before doing anything drastic


Alright... I understand your opinion.. Let's give him time before an update,Although since last till now he has gotten better since he joined Madrid. A minor upgrade may be required
Top

great speed & pass to Brahim in the 90th minute
Top

He seems to get better and better every game. Thank you Lopetegui for not using in him at all in the first 3-4 months of the season and relegate him to Castilla.
Top

He has been really impressive last month or so, probably best performer in RM not named Benzema, so dangerous with the ball, he has decent game understanding, moves nicely without the ball, one stat I would look to change is upgrade in ATT value, he has nice vision and follows the game nicely, probably most dangerous ( most likely to make something out of nothing) RM player in this run of games since he;s been starting.
Top I've seen a few games, but I can not convince myself that I need 78 in body balance. It's the only value that I think isn't entirely correct. His game is based on speed with and without the ball, and of course on agility.
Yesterday managed to find spaces easily in Barça's defense; they could never control their individual offensive projections and made excellent pair with Reguilón. if in the near future he continues to show that intelligence, it will be necessary to increase his attack.
"Technique is not being able to juggle a ball 1000 times. Anyone can do that by practicing. Then you can work in the circus. Technique is passing the ball with one touch, with the right speed, at the right foot of your team mate."

He played good yesterday, but doesn't have a good end product yet.
I can agree with the comment above, he isn't a green BB. Semedo with 76 was much stronger than him although I think semedo could go up a bit. So Vinicius is a white value BB in my opinion.
Top