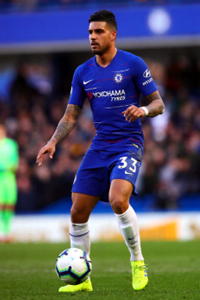 what happened to him? was the last choice for 2 years and see him now.. a key player of the starting 11. Very constant in both attack/defense
Top

Indeed, he seems to be pretty comfortable playing in the left in 3-4-3 or whatever Spaletti's formation is. He's more covered than before when he played sb...i don't like him so far, but he's gradually raising his level. His awesome goal yesterday aside, he was quite dangerous in attack and showed nice dribblings and passes here and there...also he's a running machine as well as Bruno Peres is in the right. I'm not a fan to play with wb but i think it was a good idea from Spaletti to have better defensive coverings and being more solid with the 3 hard guys in the back. I was expecting Mario Rui playing there cause I think he can give to the team more than Emerson, but with this level probably he won't play that much.
Top

He's been called up for the italian NT already, why reverting back his nationality to brazilian?
Top

Chelsea deal has gone through, just seen the official confirm on Twitter.
Top

https://youtu.be/KsERniqwr94?t=16 Emerson good pass, he has actually been playing over Alonso so far to start the season
Top

His defense is low. Hes better than this. I would recommend 4-5 points higher. Any thought?
Top

What is Emerson supposed to be good at? Asking because I've legit never seen him put it a great shift at Chelsea.
Top

thehallmark wrote:What is Emerson supposed to be good at? Asking because I've legit never seen him put it a great shift at Chelsea.

Good a carrying the ball forward though the dribbling probably is tad high and can put in a decent cross and dead ball, and is a goal threat, but otherwise very limited, can’t defend aside from being ok at tackling, and isn’t really a dynamic attacking fullback
Top
Post Reply
10 posts • Page 1 of 1