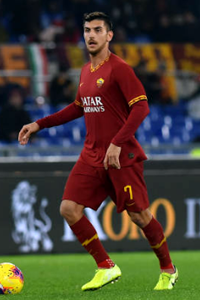 really well rounded player and in continuous improvement, also he has good familiarity with goals or to find goal opportunities.
Top Any update now that he's moving back to Roma? 6/6 WFA/WFF and better LPA comes to mind. Also def can come down I think, quite poor defensively.
Top

hmmm, I should make a new set for him.
Top

the update has been restored.
Top

His Tech demands a raise, and eyes in him getting the *Passing star.

Italy have some guys, yowsa.
Top

Regarding his short passing, he has extreme issues with accuracy. I've been watching his attempts at through passes, and seen about 10 in a row just very poorly hit. Either bad accuracy, over hit, or just played completly wrong, very very poor. This isn't something new either, hes always had issues with this, and it doesn't look like it's been corrected. And he clearly has the ability, hes a good passer, great technically, but he just fucks up repeatedly. I don't know what his issue is.

His long passing, on the other hand, is exceptional, he still has a few issues with accuracy, but with the type of passes he plays, it's completely understandable. And his long passing is much more adventurous, and the types of passes he plays with them are far more difficult than his short passing, but he has much better accuracy. Hes not at the level to just constantly play through balls over the top, for now, however, when he spots them he tends to go for them and can make some truly brilliant ones, can't stress enough how good some of these are, easily 90's, insane vision, huge LPS. He does lots of nice player pick outs running onto space on the wings too, or finding players in space in general, he's at a very, very high level, but outside of a masters level in this regard, but certainly has potential to up his game.
His power generation is pretty immense as well, he doesn't hit them hard all the time, but when he does they are pretty special. I'd probably put that in the 90s.

I'd say hes at least weak foot accuracy of 6 and probably a 7?