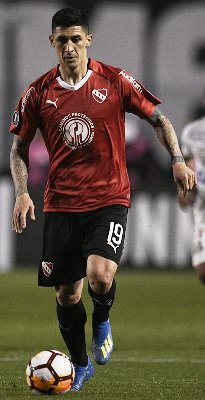 He's playing as CMF at Celta, isn't he? i think it should be fixed. Also an increase in defense is a must imo, taking into account his mixed role as CMF at NT.
Top

chamakh wrote:He's playing as CMF at Celta, isn't he? i think it should be fixed. Also an increase in defense is a must imo, taking into account his mixed role as CMF at NT.

, yes, indeed he is playing as a cm next to diaz in celta and our nt or even radoja.

About def he could get a raise for his new role in both teams and i think he shoud get definitely a better bb and body control, really hard to remove the ball from him when he is on total control of it.

According to the schedule https://777score.com/football/teams/celta-583 we will see the new play soon

I guess this guy, Pablo Hernández, will show him up on quite a decent level
Top

I'm sure he's slower and less agile than this, something like TS 76 ACC 73 AGI 74. With the current values, he can actually get rid off opposition over larger distance, something he barely does. He does some few interesting,fairly moves on the ball, but that's mostly in a small area, then he makes the distribution.

On the other side, his jump is a bit better than this. He doesn't take much advantage with his headers when attacking, but he usually wins many aerial duels with his fairly decent leap, mostly in midfield after goal kicks. Jump looks around 82-83 imho.
"Willy Wanda is Chinese!!!"
Top

Damn it, I've always loved this guy and reading some Celta supporters on Twitter makes me feel he'll be key in our team. They love Hernández cause he's a classy player. I'm really excited about watching him in my team now, he could be great. I think this set needs some numbers to be fixed, KeyserSoze's right about jump, speed and probably his technique is way better than this. I've always rated this guy very high in terms of cleaness in his touch...so elegant to play. But let's see the way he develops again in Argentina after his great spell in Argentinos Juniors back then.

It's strange this thread was created in 2016, I remember having him a lot before that in Argentinos and rating him, discussing quite a lot

Nice balance and ball retention in here, probably one of his best attributes?

It's true the opponent weren't a good measure, but still he showed a pinch of the player he's. I'm really excited about him being the playmaker in that midfield, he's so elegant and classy to play. Also he's got a nice tackling ability.
Top

Yeah, he can hold the ball really thanks to that complexion and that can come in handy to mantain possesion.

Since silva arrived and domingo is in the squad, tucu will have a more free role and play advanced not like when he plays for chile, and if he plays like he did in O'higgins before the sale to celta... you are getting one hell of a player.
!!!CHUPETE LA CONCHA DE TU HERMANA!! , !!VAMOS CARAJO TE QUIERO VER!! , !! TE QUIERO VER PAPÁ!!
Top

What a player, really. In 7 matches he made more than Gaibor in 8 months. Yesterday with 3 balls he touched, he changed the match and Independiente drew the match. He's so classy to play, solid passer and elegant. He should touch a lot more the ball and play with more freedom...he's a real AMF, slow at his movements and with a great vision in attack. He lacks defensive attributes (even being quite a decent tackler) and his stamina isn't the best, as well as his movement off the ball, but he gives so class and ball possesion to the team, specially when he connects with Meza and Benítez.

I'll give some examples of just this 3 last matches, I ignored some of the ball retention (his main quality) cause I've already posted the ones vs Ballester.

Quite decente final speed and generating the penalty:

Bad luck in that shot:

Vs Estudiantes:
Nice forward pass to Romero, breaking the defence:

Vs Cerezo Osaka:
To show his great SPS:

I'm partially updating him, there are some really strange values which makes him something he really isn't at all.
Top

Given him an update, he's been underperforming, two consecutive red cards and being really out of shape, slow, unagile and just playing because of his great technical attributes. I like him, a lot, but he's so damn uncomitted and just like -2 tempo to play in AFA nowadays. I hope him being more regular sometime.
Top
Post Reply
10 posts • Page 1 of 1