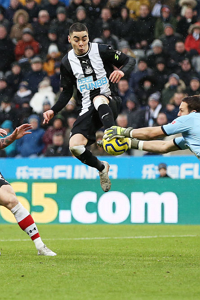 he is an speed demon, he attacks the empty spaces really well moves with intelligence and can help in defense, he is pretty useful in midline, receives the ball and moves to create spaces for his mates. Shows crazy speed on the ball and his agility looks awesome, agile as hell.
Top

What a season he had, what a match he played. Absolutely brilliant in every aspect of his style, really nice style to maintain the ball near of his feet in his dribbling, and damn he is one of the most - if he is not is the most - agile players in the league without any doubts, he can turn his body like nothing. Btw he looks quite better about his ts and ds, even looks much better than Acosta in terms of speed on the ball. Great movements in attack and helping a lot in defense, isnt really good macking tackles or looks quite dummy sometimes in defense but he is pretty realiable, at least much more than decent. btw, he is so well rated in sps/lps has serious problems to reaches his mates, but has nice vision here and there.
Top

Indeed all of that, please update him...he's seriously similar to Di María. I hope he could have this continuity, specially at nt.
Top

Vickingo wrote:Indeed all of that, please update him...he's seriously similar to Di María. I hope he could have this continuity, specially at nt.

Probably im underrated a bit in his technique stats - the overall technique, not only his bc/da who sometimes looks meh but in couple of situations makes really nice controls - especially his passing where i have some doubts, he is good making passes but isnt really constant as other players in the team who has good values as roman martinez, aguirre, etc, but those speed stats are really deserved as well as his value in tw.
Top

His match against Colombia was really good imo, he was the talisman of the team even being that young and with that mess that Ramon made on tactics. His sprints were just insane as well as his general passing...idk if he's so bad at stamina, the guy is a speed running machine. I like him, a lot...probably he should be more constant, but damn it he's so young.
Top

He's red acc material for sure. What a player.
Top

It seems he'll be

how stupid could be? see this guy. This is unbelievable, he is a great great young promise and goes to MLS with offers from England and France.
Top

How good this guy could be? Really, he's got it all, and now he's showing it at higher level. His dribbling is just lovely and he really know how to play football, he's not just an useless dribbler. I'd want to know where he'll go after MLS.
Top

Minor thing but it bugs a me a bit, his shirtname isnt Miguel Angel, in Atlanta United carry the name "Almirón" and for his NT he use "M. Almirón".

Here can be seen he using M. Almiron for the last match he played with his NT, its very blurry but it is for you get what I am saying.
Top

I think he is playing as a free AMF, he ends up on either wing and generally right up in direct support of the two front men.

Stupid MLS refs, he dived and did not argue when "brought down" in the box, probably just happy to escape a yellow for simulation, but nope VAR intervenes and instead awards a penalty, Ted Unkel and all of MLS refs just retarded.
Top

Oriello wrote:I think he is playing as a free AMF, he ends up on either wing and generally right up in direct support of the two front men.

Yep, he played as a AMF in his NT vs USA the last month. I already have him with AMF position in my PES

Not sure if he is a *Lines sort of player, have not seen enough, but to me he is looking like *Side would suite him for old gen PES, he plays around the centre circle but also drifts far to either side.

His DS and ACC is incredible, he is running circles around groups of players.
Top

I lost a bit of Almirón's trail since he left Lanus, but the truth since his days in Argentina I been a great fan of his football: fast, technical and creative. since the middle of last year that I saw him again in some streamings, until this year when I started to follow him on TV, he has not changed so much from what he did in Argentina. I thought that MLS would affect its performance, making him lazier, but the truth is that its physical performance has increased considerably. From what I've noticed, he plays freely in front of the midfield.

His physical display is impressive, runs the 90 minutes, helping in defense and attack, besides that it has a merit since its speed generates a very big wear. If we had to translate this detail to PES with his current set it seems to me that seeing his values ​​in ACC and ATT and his offensive attitude, he needs at least 86 or 88 in STA to be replicated. So in-game he can take advantage of those stats.

I have some doubts about his DA, sometimes it seems that deserves that 83 but at times I only see speed and not much contact with the ball when he runs, there are also times when the ball escapes from his control zone. It is probably a detail that can be discussed.
Top
Post Reply
56 posts