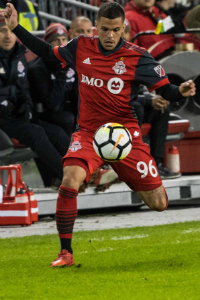 Came on early as a sub for injured Morrow at LB vs Tigres. He managed himself really well, gave the ball away a couple times with bad short passes, but otherwise he handled Jurgen Damm (90s TS & ACC, lol all he has is speed otherwise that kid is an idiot). Auro has been a delightful surprise thus far in the early season! Van der Wiel is still struggling for fitness and is underwhelming, Auro is such a nice neat player.

My only problem is that Auro, Giovinco and Aketxe all look identical in the face, its like a triplets of baby faces out there! So confusing.
Top

His passing is hazardous, he is liable to give it away under little/no pressure or try to find a forward to what amounts to a clearance that instead finds the keeper. Aside from his errors in passing he has been really good thus far, impressed with his ACC and Agility both offensively and when he defends 1 vs 1 - and he has now faced Jurgen Damm, Andres Ibarguen and some other Tigres wide player that had crazy good stats, I can't recall which one, and pretty much had them all in his pocket, really strong defensive play from him, I thought Beitashour was good here, fuck beta cuck, Auro is where its at.
Top

Gave him an update reflective if his time at TFC, mainly passing has been massively toned down, to show how he continually gives the ball away under no pressure, tonight again he played the opposition onto goal, from just outside his own penalty area, his long balls are sometimes decent crossfield and start counters and his crossing is okay (never really a fast threatneing ball, mostly they just hang when they stay in play, but a bunch go out of play or miss everyone.) - one of the most inept passers I have seen. NOTE I waited months to be sure that he is shit passer, he had maybe 3 matches where I was like, "finally these are good connections", then the rest of his matches were utter madness in the passing area.

Defensively he has been good, last ditch tackling, sticking to various aggressive fast wingers, tonight as an example C. Penilla did not really have his way as he normally does vs most MLS fullbacks. Mainly Auro is just a very agile, quick player which basically covers most of his defensive competence, as he still has postional problems and some concentration issues.

Overall a decent replacement for Beitashour, van der Wiel is toothless compared to Auro, no idea what happened to the dutch man.
Top Oh...such harsh numbers...
But yeah, Auro was/is a really good wonderkid in SPFC academy but always showed really good athleticism and a poor technique, it wasn't all that poor tho cuz he used to give good crosses but I'm not following his job at MLS xD
I hope he refines it so he can become a more complete SB, he still has potential and the Brazil NT needs a proper RB for the future

I watched that compilation vid in first post (did not notice it earlier), there he has some good passes/crosses, I don't know why its disappeared from him - I'm rating him only from what I seen, gave him 8 months, he knows the teams system/style - he just seems a very sloppy passer - he is on loan so if he goes back to Brazil maybe he will resume what he did before. Right now he is more a liability than a creator.

I did not realize he was considered as a wonderkid/future player for Brazil's NT, kinda surprised by that, expected that there was more rounded talent available - he lacks dominance of the flank that I would expect from a high calibre Brazilian fullback, heck even Alex Sandro cant crack the squad. I too hope he can improve.
Top
Post Reply
7 posts • Page 1 of 1