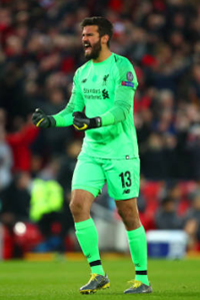 Awesome goalkeeper. The best in Brazil and slightly underrated here: 81 on DEF (one point below Ceni); 86 on RES (his main attraction; in time, i guess it may go to oranges); 70 on MENT (Inter just don't lose more often because of this guy). The best thing is watch a full game of his, but this outdated video may help: https://www.youtube.com/watch?v=_-XtPNqH-Ck
Top

I was compiling videos from him to post here. He is truly elite in Brazil now, even leading the Armando Nogueira (kinda like a MVP award given by de media). That video posted by Hans is from last year, and he is even better now. I just don't think that he is bound just for RES, because he always knows how to catch the ball, he doesn't throw himself in the shoot, he stops the shoots with his arms. And he simply doesn't commit errors, like bad parries, gaffe goals and so on. Comparing with Marcelo Grohe, he is far better at handling, and his actual GKS is 78, Marcelo has 79.

Another thing he is praised for is for his skills with the foot (for a GK level player, of course). And he can mantain his level through games, maybe Form 6/7, I think.

this is from the last game played
https://www.youtube.com/watch?v=ktEKFw6iUIM

at 4:55 is the penalty save. He isn't a penalty stopper, but it's to show his handling. And there is the 7:28 save
https://www.youtube.com/watch?v=0-fDR3IJszI

at 0:11 for a dribble
https://www.youtube.com/watch?v=dxiy3LCS2kU

Every game he makes good saves, so this is just examples. The Inter 2 vs Tigres 1 has great saves too, but couldn't find them...
(I tried using the "youtube" button on the advanced text, but the preview still didn't show the video boxes, so I left just the links. Anything I'm missing about this?)
Top

He is better than this stats. His name is Alisson Becker
Top

Look for the saves in 7:30 and 8:05 (close to that against Chapecoense)
https://www.youtube.com/watch?v=l030aJtwAJY
Top

Done guys, yeah he had one great match against TIgres, I watched it full and he was awesome.
Top

It's better, really. I've read the FORM topics today, and now I "exclude" the 7 form I've said before, but still think that he deserves more than he has now. He getting purple-gray arrows on ML would've to be REALLY REALLY rare. He is the most consistent player of the Squad. And maybe a one point raise on his DEF, since he is really good on the 1-on-1 situations (being DEF the case in this).
Top

To point out, he is conceding some laaaaame (I wanted worse words, but would've been gross) goals in the game, totally opposed as his real-life counterpart. Before this update, I had him in my game with 83 DEF 84 GKS and he was much more "real". He doesn't concede the goals he's taking in the game with the current stats, even more with Yellow Arrows.
Top

Finally found a compilation of this year!

Get ready for sweetness with the 1:22 save and the one after, just sayin'.

Vickingo had done a good job. Initially gave 78 for DEF and GKS and 83 for RES, then updated in some points. He was careful and correct, because Alisson is a young man and he wouldn't want to oversell it. But must have used as a base just a few International matches for the Libertadores.
In General, now I updated Alisson a way closer than he presented throughout the Brazilian championship and Copa Libertadores. He is really a good goalkeeper, in spite of her age, and even was named to the National Team.
Top

Move him to Roma. He isn't a Inter player anymore. Danilo is using the 1 and he already appeared at the italian capital.
Top

he is not inter player, but not OFFICIALY Roma player either

there was no official anouncement even if it does look like he will move there, and that will happend once the transfer window is open in europe.... so no rush to move players yet...anything can change so fast...
Top

But the transfer is official. The only thing missing is the opening of the Euro Window, than Roma can decide if they're going to keeo or loan him to another team. I think it's better to keep him here, because he won't be at Inter anymore, thus, this give the people of this forum material to work on the set, debate, this kind of thing.
Top

Well, I know he was doing it well at Brazil but his level at Roma is pretty bad tbh. I can't believe he's nt keeper, isn't there anyone better than Alisson?
Top

Vickingo wrote:Well, I know he was doing it well at Brazil but his level at Roma is pretty bad tbh. I can't believe he's nt keeper, isn't there anyone better than Alisson?

He's so fucking bad, really, can't believe why Roma still keeps him and he plays important matches like today. Szcesny is way better than this guy...i can't believe he's NT first choice, his handling must be one of the poorest at Serie A, no way he could get 82 in KS tbh.
Top

Well Vickingo, Alisson IS a solid goalkeeper (although he obviously isn't a top level GK). One of the reasons that he's starting on NT is because most of the other choices aren't great either, they're all either at his level or below him, but he hasn't disappointed while playing for NT yet.

Also, having the poorest handling in Serie A is relative and doesn't mean he's worse than 82 since there are many other talented keepers there. Without checking the ladders i imagine 82 KS is already one of the lowest values for GKs in Serie A.

EDIT: According to PSD's ladder there are 37 goalkeepers with 83 KS or more in Italy (including Serie B), so yeah. Clearly one of the worst KS in Serie A.
The goalkeeper isn't another one, he is THE number one!
Top

I don't care and we shouldn't care at all about that, if his handling is shit, we should give what he deserves...he has lots of other good numbers to replicate how good he can be, but why give him a number that overpowers his abilities in game? That's past PSD...at Roma he's been showing "white" number in KS since he went there.
Top

His game today against Lyon summarizes his overall style as a keeper: Shitty handling/KS ability but still fairly good as a shot stopper, even in one-on-one situations.
I don't see any reason to keep his KS better than 78, but DEF is the keeper stat which impresses me a bit more... Yeah, even more than RES. Nowadays I have both his DEF and DEF at 84 in the OF, but I wouldn't mind if the latter was boosted a bit, like 86. And... If he's so rated as an inconsistant perfomer, why does he still has Form at 5? He's merely a 4 regarding Form, even a 3 wouldn't be a bad call.
"Willy Wanda is Chinese!!!"
Top

Alisson has been showing a great response and a good agility, definitively one of the 2/3 best keepers of the league.. at least for what is showing in those 11 days of the league
Top
Post Reply
72 posts