I personally think that is underrated (specially his TS, ACC, DS and AGI IMHO), I make a set for him, with that few games that I see for him what do you think Defo? He may be faster than that but his overall time spent of the pitch isn't enough to have an accurate view on him...so I'm leaving with some benchmark values for now, we'll see in the future.
Top

what a player! 5 goals/5 matches in the Sudamericano U20. What a great definitor he's, he will have 2 or 3 chances per match and at least one is goal.

btw, his SA, SP and TECH looks better than this. when end the tournament U20, i leave with some vids and explanations, now i prefer wait to see him a bit more to do better suggestions
"Serás eterno como el tiempo y florecerás en cada primavera" Club Atlético Peñarol
Top

I'm eager to see your suggestions. Ohh, and he's suited more in a *SS role; WF and SM are secondary.
"Willy Wanda is Chinese!!!"
Top

whats with the picture?

@Epsi
His shirt name is NICO LOPEZ..i've seen the match tonight.. or he has another shirt in the league same as Badu?
Top

I remember him having "N. LOPEZ", but I can be wrong.
Top

as for position SMF should be added. also I think some stats needs a change such as:

and add out side curve(must), side stepping skills(must) .
vamos arriba la celeste !
Top

On loan to Granada.

Very interesting player. Dynamic with a lot of personality. Looks much better in the distribution of the game, his passes are incisive but not necessarily accurate. The air passes are very good. Against Corinthians showed a couple of times an really nice LPA, evenmore, is the oficial corner kicker of the team. He has a excelent notion of time /reaction always beeing dangerous in anticipations vs defenders. Response on 77 is very low for him. He is aggressive and seem to be the case for much, really much higher tenacity, even on stamina and defense. 73 BB is fucking low, he has a decent/good force. Know very well uses his body with inteligence at physical duels. Think 85 on DA&TEC is a bit higher. Maybe a little better sa/sp/st.
Top

He needs a uptade. I did a set of him, can post here if a explain all the stats ?
Top

Last season he has great numbers but this one? Damn this guy can destroy defenders when he wants to, create a bunch of plays but this season? he is looking very often bad, his SA and ST are very unregular specially his SA, most of his bad shots lacks accuracy even if they are easy ones. He also has some difficult carrying the ball, im not impressed by his DS.

Impressions remains the same, he is a good player but not very consistent, his shooting overall has gotten worse, his DS surely needs a drop, while he has his qualities on DA sometimes, he needs to punt the ball to be able to use his speed to beat players, DS at 82 is fine but i wont be against a lower value. 1-1 scoring should be removed.
Top

Gave him an update to his DS, there are other things i feel are too high on the set still, but we'll see.
The goalkeeper isn't another one, he is THE number one!
Top

The shoot power his is very weak.
Top

Viyut wrote:Gave him an update to his DS, there are other things i feel are too high on the set still, but we'll see.

I think the most obvious one is his lack of precision while shooting, even losing an important goal against flamengo in a chance that you would say that it was a 1-on-1 against the keeper and yet he shooted it wide.
He is not being very consistent and when he plays well he is very agressive on dribble and quite successfull at beating them, another thing is that he lacks the supportive movement and very often he can be missed from the game. I will also think you can be more harsher with his DS, he is really struggling to move with the ball and needs to send it foward to fully use his speed.
The rest of the set maybe his Mentality needs to be toned down, his passing is still solid enough for greens, his biggest problem there days are really his shooting, his season would be much better if he scored the goals needed instead of shooting it wide like he did.

Besides the old suggestions i would say his TW needs a decrease to 60s level: 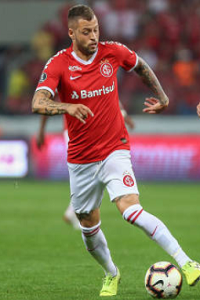 Better to die quick, fighting on your feet, than to live forever, begging on your knees!
Top
Post Reply
20 posts • Page 1 of 1