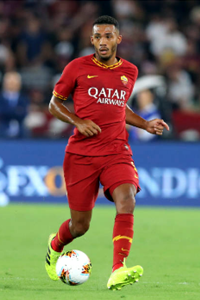 It's a nice set I just think you overrated him a bit, I just have watch some games of him most in SUB-20 so I may be wrong:
ATT: 64 (This ATK is very high he should be bellow Juan(Roma), even he being capable of play as SB he don't deserve to be in pair with Mario Fernandes, who is a lot more suitable to attack.)
DEF: 77 (IMO he is not 2 points over Neuton, neither deserve to be with the same value of L. Castan, L. Euzebio or Manoel, with 77 he would e in pair with Dedé.)
RES: 78 (This value is the one that I disagree more, 82 puts him between the best tackles in Brazilian League, IMO should have 2 points between him and Bolivar.)
AGG: 68 (He is not aggressive has, T. SIlva, Pique, Chicão or Miranda, 68 is more than enough.)
I have some doubts about TW and Form, I don't see any reason to be so high his TW and he don't even had time to show that deserve 7 but he is young and generally young player can play a lot of consecutive matches.
Top

Update.
I watched his game vs Vasco he showed a great ACC and his DS needs to go up for sure he can run at a good speed with the ball, probably ACC 79 and DS 75~76 should make him more realistic.

And I, Anders, think exactly the opposite. He's quite slow off the mark and also pretty sluggish on first meters. I come here thinking even on something like TS: 77 and ACC: 76 on first post. Wouldn't be wrong, in all fairness. I'm also quite sure his BB should be on high yellows. He looks a bull. You can see how wide is his chest. I'm yet to see someone knocking him down.

For instance, he's slower than Juan (Roma), and quite a much stronger than him. I think a high number like 87~88 wouldn't be so crazy. Also STA could be higher, he played a couple games on the side back and did the "back and fourth" all the game without even becoming tired. So, a my initial propose for update would be:

Can't agree about the speed, danyh. I've seen a really sluggish player, maybe his problem are only on first meters, but I don't think he's faster than Juan (Roma), for instance. Rafael Tolói is also faster than him, Breno is faster than him, and both have similar height/weight.

About SP, you are quite right. Don't have a concrete value though. Would like to see your opinion, if possible.
Top

so i am interested now, how is he? A future Lucio is near ?

Not a bad player at all, if you ask me, Interist. I had bigger expectations on him, but I must admit I was wrong. He's a decent player, no more than this. He's strong and has a good tackling, but he's quite sluggish at turning around, so, he has really huge problems against tiny agile/explosive players. All in all, his biggest problem is that he has no brain, unfortunally. He's dumb on every aspect. And he's also antiethical and hot-headed. I expect you'll have lots of headaches with him.
Top

he may need to improve a lot then, I guess some muscle on the left would be enough to take Chivu's place anyway. thanks for the reply Pedala

did he moved to Inter Milan already?
Top very close, but in Italy is said he will go to NOVARA on loan until next season
Top

he did the medical visit with Inter today...
Top

He's new Inter's member,but they loaned him to Novara.

And what do you think about little update?
Top

And what do you think about little update?

Novara has chosen to sign Gabriel Silva from Udinese so now Novara can't buy another extracomunitario...Juan will stay at Inter..move to Inter section
Top

Have you official source?On Transfermarkt he's still in Novara.
Top

also transfermarkt isn't an official source. Juan went to Milan and he has done the medical visit with Inter and he stay there..the team manager of Novara said today that they will not buy Juan because they will buy on loan Gabriel Silva from Udinese
Top
Post Reply
180 posts