being a leader have nothing to do with mentality. how he reacts in game is mentality. but imo its underrated, something like 77-78. 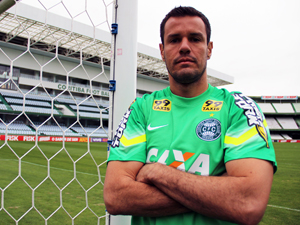 I updated he and removed some very high skills. He made only three goals when he was at Figueirense (and came out around three years): two penalty and one free kick (kick low and weak, by the way). I can not understand how he had FKA 77, SWE 75, SA 66 and ST 65.
Okay, it's a keeper, but just three goals and he had these skills? This seemed illogical.
I reduced so as to be within acceptable parameters. The current values does Wílson on same level with several defenders and their FKA and SWE combination is good to score some goal, maybe.
On his other skills, I increased their attack to 33 (because he has some offensive consciousness) and upgraded their own skills keeper.
Considering the whole set, there are no problems if the form remain 6.
Top

This is not about the video specifically, but he has good tenacity.
Even in times where the Coritiba is losing or under pressure, Wilson is one of the team leaders and keeps firm in its position.
Among all the team players, he certainly is one of those who have better mentality, along with Kléber.
About this video, this can be considered a good example of his mentality. His team was losing 3-2 and he went opponent area after 95 minutes, where an opportunity, scored the crucial goal for the tie.

Today was a good game that illustrates how important he is on the team and how he handles pressure. The Coritiba are in the relegation zone and in today's game he defended two penalties charged by Diego Souza in the match against Sport.
The first penalty was in the first half, when Coritiba won by 1x0, though the second defended penalty was in the 74th minute, when the team was losing by 3x2.
This was crucial in the development of the result, as his team turned the game in sequence to 4x3 (and left the relegation zone, as a result).
He is indeed a leader for the team and one of her most important players, since a long time ago
Top
Post Reply
12 posts • Page 1 of 1