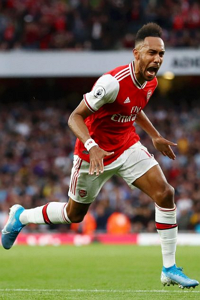 Some suggestions:
I don't think he deserves ST 82(almost the same as Gignac,Niang,Gameiro,frau...). His striking of the ball didn't seem particulary good. His overall shooting is even poor(i doubt he's better than Riviere).
Moreover is he really as aggressive as Gomis for instance? And more than Gameiro,Riviere, or Loic Remy? He's fast(by the way he could have an higher TS) and likes to make runs forwards, but not better than those players.

He's hit quite some nice goals though, with both Milan as well as Dijon and Lille (I believe). He's quite often scored a good half-volley or something, taking an acrobatic shot. His shooting is quite poor, although not at all easy. Hence the low SA, he tends to miss a lot of easy chances but he does now how to finish the harder balls.

As for Aggression, I guess it could come down a little.
Buon compleanno, il pibe d'oro.
Top

On new 1 yr loan to Monaco

I recommend making him even faster...
Watched him in a friendly against Marseille the other day, wow... never seen anyone that fast.
Faster than new team mate Gakpe:
Top Speed: 86
Acceleration: 87

So I would strongly suggest putting his speed and acc. in the red range.
Top

I dont know if he'll have chance to play or loaned again. I would like to stay with current stats. Even lowered some...maybe...If anything need to increase maybe its speed ? He's in AS Monaco now. and RM/RWG?
Top

Yes you have to up his speed as he was able to completely beat belladj to the through ball but also outpace him with the ball at his feet,the only defender i have seen keep up with him was aly cissokho who also needs to be updated on this site.

I would put aubameyang at 89 acceleration and 88 top speed,his dribbling speed would be around 85 to 86,he is really that quick,some people call the fastest player in france even though mazzoo of bordeaux and aly cissokho might have something to say about that.

Look at 1 minuted in this video how he left them algerian defenders.

And here his another video which shows just how quick he is,me being gabonese makes me have to really fight for this guy as we have never had a player blessed with not only talent but so much pace,i am always keeping an eye on him.

See at 5.54 the way he leaves those 2 algerian players and that with the ball so we can clearly see he is quicker than what is given here. and at 6.13 see his acceleration compared to belladj who couldn't keep or catch up to him and i know a lot of you consider belladj to be a speedy player.

He has been clocked at 37km/h on average in the french league which makes him even faster than c.ronaldo 33.6km/h,the guy is insanely quick and i am sure soon people will know about him.
Top

zinaldo1982 wrote:He has been clocked at 37km/h on average in the french league which makes him even faster than c.ronaldo 33.6km/h,the guy is insanely quick and i am sure soon people will know about him.

where did you get those numbers from?
Gotta change my shirt, it's sticking to me. I'm sweatin' like a cunt. Don Logan
Top

Hey guys ! That it for a long time and that changed well !

For Aubameyang, zinaldo1982 is right, but i saw 34km/h in the match against Marseilles. This number has been calculated in a sprint. This value is real.

Maybe the fastest player in the world, without joking.

He is quicker than jelen as jelen has unfortunately grown older and slower, i would put him at 93 acceleration and 94 top speed as he is that quick and seems to get quicker as he gets going a bit like cissokho of lyon.
Top

They are saying in france that his time for the 100m is 10.80 or 10.90,i mean that almost like a sprinter,i know i keep going on about him but he is that quick and him being from my country i feel i have to stick up for him a little more,please change his stats,thanks.
Top

Isn't he a winger???
http://www.football-lineups.com/footballer/27821/Analysis/
Top

The shoot is too high.

This player never shoot in the target. He is very poor in shoot accuracy. He scores only three goals this season and two with Monaco and two with Lille. Although he often shoot he never find the box. Look Payet and Rivière who scores a lot this season they are only 78 and 80 in shot technique...
They have eyes but cannot see; they have ears, but cannot hear; they have tongues, but cannot speak. They are like cattle.
Top