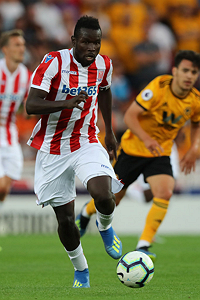 I hope he doesn't mind this

Attack: Mame's off the ball movement is arguably his main asset and he certainly involves himself in build up play. One of his big strengths is that he can find space behind the defenders - like Saha - but also be a targetman. It makes him unpredictable, and difficult to defend against.

Defence & Mentality: At Molde he was very hard working, and that he was not only a great attacker, but also a good first defender, always tracking back to help out with the nitty gritty, somewhat similar to Rooney in this aspect. Although this was different due to Molde somewhat playing him as a winger at times, as Molde have played with three men in the attack while United mostly play with two, his style may change, but I expect his hard working nature to remain the same. He doesn't mind helping out defensively and is quite good at closing down and tackling players, but his positional awareness is a bit lacking I think. He is an attacker, no doubt about that. Unlike headlesschickentevez his defensive work doesn't take away from his attacking threat.

Balance: The ability to hold someone off is down to strength, not size, and Mame held his own against the likes of Reginiussen and Madsen. There's a natural aggression to his game that I don't see in Eto'o's or even Saha’s who his style is comparable to.

Speed: Physically he's fantastic, with blistering pace, including a similar style to his game as Andy Cole once had with a frequent, yet sudden burst beyond his marker.

Passing: Now, as a part-time winger Mame has had to build up a certain level of passing ability, one which has been able to give him a ratio above 1 in 3 assists a game, as well as that his passing doesn’t only impress at short passing with some nice intricate plays but as well as that he puzzles me as every other game he plays Scholes-like passes over and behind the oppositions defences, which is intriguing, although not frequently enough to rate as top notch, it’ll certainly be one which may be eradicated once he starts to consistently play as an out and out centre forward though. An example of this could have been seen in the 5-0 thumbing of Rosenberg at the hands of Molde, where Mame could easily have had three fine assists. (But got none.) One of them was a surprising Scholes-esque long ball over the top to Thioune who for once miscontrolled it.

Jump: Regardless of height, he can out jump most. His leap is amazing. Being a mere 178cm tall you’d think a man of his stature would struggle against taller opponents but, somehow, no, Mame finds it somewhat too easy to beat a man who can be a good 10 cm taller than him in the air.

Heading: He's probably the best header of the ball in the Norwegian league. I'm pretty excited by Mame’s signature for the simple reason that he'll offer us something very different, Aerial prowess, being a strong header of the ball both offensively and defensively.

So, I guess you’re wondering where his flaw is. Well, to be perfectly honest he seems like a bargain basement Saha, he’s definitely one for the future and will more than likely play with Ole’s reserves for a while, while he acclimatizes to his new surroundings. In other words, he's got the lot but he's inconsistent, at times let down by his decision making, nerves (I think), and often just plain poor execution. He's been a bit inconsistent since signing for United (in part due to by being played out of position) but when it clicks for him he's got a lot to offer; pace, power, a very good first touch, quite a bit of passing ability. 8 assists in 27 games suggests he's more than just a goalscorer but whether he can take it to the next level remains to be seen.

Wow.. highly rated set. I could disagree with some details, but I've only watched him 4 times (against Wolverhampton, Porstmouth, West Ham and Burnley). After all, why not.

That's what I think too... against Wolverhampton he was just a little faster than Guedioura (TS82, ACC82, 60min played) on a counter-attack, but he really wasn't such an impressive sprinter.

However I agree with HEA, he's really really amazing!

And his height is right, according to Fergie (5ft10inch)...

are you English mods sure this guy should be here ?
Top

as the stats are made by a prem mod they should be.
Top

In some countries (such as Iran I guess), but not all.

I think Paddy have gone a little bit overboard with this guy. He show some glimpse of skill but does he already deserve all of these stats?
Top

I take it none of you have seen him play for a full 90 minutes.
Top

i'm agree by Paddy we didint see him full times in several games, but by little minutes that some of us saw him and clip we can just say our ideas about his overall abilities like speed and jumps not any accuracy and game reading and somthing like this because here is his new team and need time to be match by team. IMO

but about speed with the ball that Zorb showed (thanks Zorb for vids) i think his DS should be on low 80s but without ball and when he try to reach his ball on 3-4 feet distance he has very good pace like on same video.

but what i saw on him in all videos that are in youtube about him, i felt his Acc can be 86 for now.
Top

i've found that his height is 6'1" = 185cm from:
Wikipedia
Mirror
Skysports
Goal
i hope that these are enough sources

no he is not that tall, he is the same height as solksjaer (178)

Approved, I was about to post the image too:

i'm so confused, in the videos he seems taller, and about the pictures, they're from last year when he was signed, he could have gotten taller since then, but i don't know maybe he is 178cm

He grew in less than a year 3 inches!! LOL!
Top

a friend of mine was 175cm last summer when we went school, i visited him on easter holidays and he is 186cm so it is possible

Yeah the thing is though your talking about a friend who is I am guessing the same age as you so thats 17-18 over the time period, a period of life where you grow a lot, and anyway were talking about a 22 year old here, at that age will have stopped growing some years ago.

Not to sound rude but I doubt your friend grew 4 inches in a year, 3 I'd beleive but not 4
Top

Haven't you studied biology at school?? Men stop growing taller at the age of 23-24 and yes, my friend grew up 4 inches, in Cyprus all of the men who finish school at the ages of 17-20 they have to serve the army for 2 years and before the army they are tested by their doctor for blood type, urine, height, weight etc. and in the first 2-3 months they're training physically, mentally and discipline in a camp and he was listed as 175cm and after the training they're testing them again so the can certificate for any difference and they give them an army ID which has their name, *height, *weight, DOB, and their temporarily camp!! i saw the ID by my self, and he just told me that he got tested by his family doctor and he found that he's 189cm now so i believe that the combination of: genes, healthy food and exercise can make you grow taller, but tbh i don't know how this works, i've been 175cm when i was 15 till 17 and i was taking football seriously and i went to training 4 times a week plus the games and i ate healthy but my genes (still) don't "work" and now i'm 172cm so only a doctor or someone who studied about this might explain how this happens!!