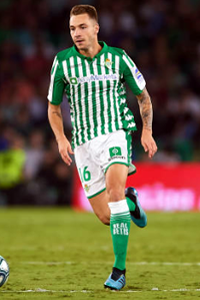 Well Loren is a little strange player. He's able to shot with power but he has almost ever to decide between accuracy or power. It seems that he can combine them well. When he does scores goals like the first one he scored with the team.

Aggresion seems very high to me; Tonny Sanabria makes a lot of pressure, more than him. Even Sergio León. OK, this doesn't infludes in willingness to make pressure, but has to do with likeliness of him to stick or not to his position. It should be lowered, though, but not as much as I believed. He doesn't pressure the man, but he covers. There is another stat which is more related to pressure, but I don't know what is now.

I'd set his condition in 6. He's playing almost every matches since he joined, despite the fact that he joined last season in window market. In addition, he had been the Betis B's reference. He scored 17 goals in 23 matches and he ended up as top scorer of his group in 2aB (2nd B, 3rd Spanish division). Although, his team got relegated at the end of the season.

Of course, it's my opinion
Top

Very disappointing season from him, form can drop to 4, he also misses quite a few easy goals so maybe high green SA? (77~78). He tracks back a little more for 30 in def, something like 41 should do him more justice imo.
Top

I'll update his def. His SA maybe could come down despite him being the top scorer? Hes very dangerous, mobile and has nice ST, but maybe his SA is a bit too high indeed. Let's see how season goes but he may use a bump in att too. Response too, i think it's always been his main asset (besides his ST), hes looking sharp this season, unlike the previous one, appearing where you'd expect him to appear and using spaces quite well to go for the goal. He's a good poacher, no doubt.