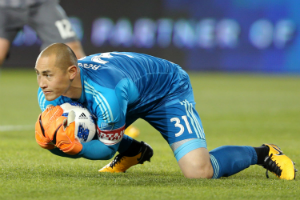 Want to add he sometimes plays a very effective sweeper keeper, I believe that is the Offensive Goalkeeper card in new games, but I read the game makes them far too aggressive leading to big errors, for this reason I have opted not to give him that style card, and just leave him in a more "neutral" style in regards to new PES. To preserve his effectiviness at interventions rather than always rushing out.

I've seen him complete I think two sliding tackles outside the box to win the ball off a forward, it was 50/50 as both were reaching it at the same time, if he does it again I'm gonna give him the star no matter how odd it will seem on a keeper.

Addressing height for any future poster, he is listed 185 cm many places but the MLS site lists him 5'11'' and photos seem to show him shorter than Klejstan (185) and Aaron Long (186) https://i.imgur.com/POKUpjl.jpg Its confusing as sometimes he really does come off as taller..really in shape broad shoulders, strong taper V-line back, his build makes him cartoon athletic maybe this adds to the impression of him being taller..?
Top
Post Reply
2 posts • Page 1 of 1