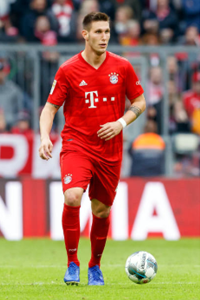 He's been under our radar lately, despite his solid season at Hoffenheim so far. His mental stats are fairly better overall, same as for his overall passing stats. He's mostly a butcher, no-nonsense defender, but I don't think he's that technically poor (at least, not to this extent). At his tender years, sometimes he looks more mature, down-to-Earth than the likes of Schär or Bicakcic...
I will update him next week, once I get closer to a laptop.
"Willy Wanda is Chinese!!!"
Top

He looks slightly (and surprisingly) faster over long distances. His ACC is crappy though.
I'd rate his TS/ACC combo like 80/69.
"Willy Wanda is Chinese!!!"
Top

Any thoughts on his passing stats?

He's surely more conservative as a passer if compared to Boateng and Hummels, yet Süle is still quite competent when he has to dictate tempo with his passes. He actually has the ability to put fairly incisive passes from the back; he just does moderately, heavily depending of the circumstances.
"Willy Wanda is Chinese!!!"
Top