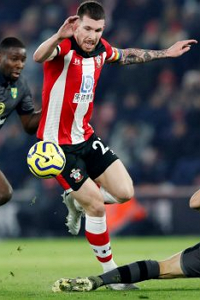 The flag of denmark is -

Are you sure about SP just at 82?
The few times I've seen him playing for Augsburg he consistenly attempts powerful long shots.
Ain't sure if Long Ranger is required, but SP looks like 85 at least. He even scored a peach with a scorching shot with the outside of his right foot against Gladbach last Saturday.
"Willy Wanda is Chinese!!!"
Top

He can easily be mid-yellow SP. Perhaps even green swerve. And he scored an outside curve against Paderborn, too.
Top

Agree with higher SP (85 at least as KeyserSoze post).
Btw, playing as a kind of box to box midfielder i request higher STA as an option, something around 83-84 and 3/3 or 3/2 for ATT/DEF awareness. He seems to be a good promising player, ideal to replace Schweinsteiger in the near future.
...U dared to enter my world...

I watched him many times for Schalke and Denmark u21 and i closely watched him against Serbia last year, and i know him well. After the first half against Mutd i came for the first time to see his set and he's much better than this stats are saying.

First of all, his tw is his biggest quality. Tactically already classy player, fantastic without the ball, always an option for a build up play early, moving around to find a good position to recieve the ball. 71 can't be serious, he's already for 84 or even 85.

Att and def can also go up, especially att. 72 would be more realistic, def would be perfect on 69.

Long passing can reach the yellows, he's not a pin point passer most of the time, bit his diagonal long balls are really good, he's so good in that, something about 82 would be really good.

Response also shouldn't be on whites, in defensive sense he's quite responsive, he always wants to be close to the ball, and can be really aggressive. Can go up to 77.

Mentality also is too low, should be in range of high whites, low greens for the start.

Edit: i doubt he deserves a BTB card. He's probably a playmaking candidate.

These are some suggestions for the start, because he's so underrared so i wanted to at least highlight his main qualities.
Top

He is so fucking slow and unagile, his speed stats shouldn't even be in the 70's, same with agi.
Top

What a player, really did well against Arsenal, defensively mostly, altough they only defended for most of the time. In possession he is so calm and simple and smart. He is always an option, and he is a leader really, he is talking a lot, and commanding the midfield with his gestures. Defensively, some brilliant interceptions, coverings, and tackles. In only one situation hr had a positional mistake, but even then he managed to fix it later. Potentially an orange TW player later in a career, altough i must agree with Jurgens. That 81 ts is way over top, he is also white for agility and acc.
Relja's not dead
Top

Seems like there's a consensus regarding his speed stats, could someone make the change? Kinda looks like an oversight.
Everyone knew it was impossible. Then came along a fool who didn't know it, and he did it.
Top

He could be a candidate for 69-70 defense if he continues the way he has been playing. Been offering some really good covering and clean tackling. Wanting to leave it here for later consideration since I am watching them a lot recently. Might be a hair stronger as well.
Top

Will get around to him more later as he’s one of their top players and very underrated in his own way. Very smart player who excels at winning the ball back very high up the pitch in the midfield and then making a simple pass to get the attacking movement started. He’s a very critical player for the side and does so much to bring order to the side. A clear beneficiary of his education under Pep despite never really playing during his time at Bayern. I remember the praise he had gotten and clearly that player spotted them is in there.
Top
Post Reply
14 posts • Page 1 of 1