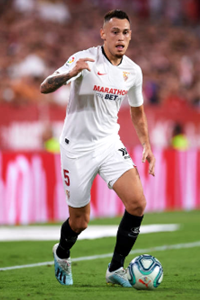 why he has 1-on-1 stopper ?
vamos arriba la celeste !
Top

83 on stamina is not very great for her age?

He is amazing controling the ball, i think he should have something like 87 in DS.
Also, he's left footed.
Exellent set, have that little detail like the Mentality and Acceleration that make it very realistic.
You want a grat signature of your favorite player or team, a new Avatar? Make your order in the Designs Workshop Thread

We didn't want to overrate him, he has just 10 games in 1st and he didn't demonstrate more than 82 in control of the ball, sometimes is inconsitent. Always we have the opportunity to change the number, but until now he's Ok at this number compared with other great dribbles of 1st division (for example he's far of Diego Morales' or Martin Rolle's dribble). About DS, we had a discussion with Julgui also, and taking into account his nice TS, with the current number of DS he'll be well represented in the game. Also we compared him with players as Pato Rodriguez (84/85 in TS and 87 in DS), and Ocampos isn't clearly faster than him with the ball, taking into account that Lucas has a point more in TS will have similar speed with the ball. And about the foot, we put Right.
Top

The figure of yesterday's match. I can confirm that he's Right Footed. Also, he made twice or three times a kind of Marseillese Roulette.
Top

Maybe a ATT boost and ★Reaction will make him more incisive. And raise his jump too
You want a grat signature of your favorite player or team, a new Avatar? Make your order in the Designs Workshop Thread

I watched him very closer in the lasts matches and his speed is really difficult to determinate, mostly his final sprint. He seems fast but in long runs I've realized more than once that players who are suppose slower than him could beat him in long runs in the side. His acceleration is perfect rated, his firsts metres are terrible, his acceleration is really low but when he catches more rythm in his run, he's a fast player...but I have doubts if 86 is the right number.
Top

Why does he have the card Marauding and not the star *Reaction?
His stats looks like an awesome promise for such an age. Would like to see him more.

His DA is simply amazing, IMO it could be 84-85 without problems
Top

Yeah without any doubt...he's playing each day better and must be one of the best players in Argentina. We can remove WF. Also his ATT intelligence is really better than current, he's able to handle any defence by his own and being incisive to generate danger. His TS-ACC is an issue too, firstly I thought that he was really fast, but what he usually shows is a good pace without the ball but current number is a bit high...I think that with 84/83-78/79 in TS/ACC will be more than enough, keeping current DS value. His agility is very good taking into account his size and it's almost perfect in game, he looks fluid but with his height/weight looks pretty realistic doing those turns in top speed as he does in reality. Btw, I'm not sure if with 81/82 will be similar and mark a more real movement in his dribble and turns, I'll test it (want more opinions tbh). His DA is just amazing, without any doubt could go considerably up, his control in speed is even better and his variety of dribble is really impressive...I'd go for 85 by now but if he continues showing an average of this dribble could be even better. His SA needs to go up without doubts, and not because of his last week amazing placement goal vs Chacarita, in general his shooting combo is really underrated taking into account his performances, his ST is almost very good and usually takes difficult angles of shoots. I'd go for green values in both and probably needs a better SP too. Difficult to rate his curling as he doesn't take too much free kicks but in that goal vs Chacarita showed a really amazing curling in the air and when he shoots long crosses makes a good curling shoot too. IMO header must be in yellow, he's really good tbh, more than that...his ability to header in difficult moments and with pressure is amazing and he scored if I remember well 3 goals or more just with his head in few games that he has in 1st division, and following him closer, most of his header shoots are near the goal...80 could work better. TECH...any doubt that he could have 83-84? He has the ability to kill difficult aerial balls and usually his tricks are due because of first quickly and fantastic 1st touch of the ball. Probably is even better than values that I've said. Not sure but TW could go down too.
Top

Yes, I agree with that. I'll try those values ingame and then will come back to leave my suggestions. What about DEF? For example if I compare with Lopez Macri (who isn't exactly the same position, but the comparison is possible), he has 47 and tracks down and makes pressure to the opponents better than Ocampos.
Top

just i was going to ask about AGI, with the changes in PSD, maybe he could use a decrase, with the raise in DA could be fine to represent his style
THANKS FOR EVERYTHING, THERE WILL BE NOT ANOTHER LIKE YOU

Yeah I thought it too, but he's really agile to his size, he always make quick turns to avoid markers and scape with his DA, he uses it...btw I'm not still sure about a value but could work fine in yellow's.
Top

Made a needed update with mentioned values.
Top

He scored again...may be I was too conservative about his attack value...he's dangerous as hell everytime that he takes the ball and his placement is really awesome too. I've realized some awful technique to takes some balls, but in 80% are class trapping...it's something confusing to rate it.
Top

agree with raise ATT without doubts... for what you said abourt add WF maybe his a bit more in AGG could be well replicated IMO, becuase clearly starts as SM to me
THANKS FOR EVERYTHING, THERE WILL BE NOT ANOTHER LIKE YOU