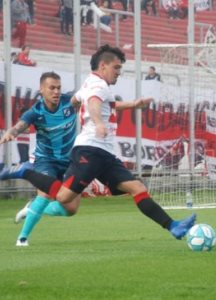 Nice stats, I was going to did him ajajaa.
Suggestions:

He's a good dribbler, and with speed.

I watched all his matches in the last season and he always go ahead with a well convincement. I think he deserves

On loan to Manta FC (Ecuador)

Returns to Lanús, and move of Lanús to Atlanta.

He's far faster than the current numbers. And his AGG is better.
Top

I remember a yellow number for AGG, for sure he deserves 82/83 there (as my original set) and as I said before he is FAR faster than the current, something like 82-85.
Top

vickingo_73 wrote:He's far faster than the current numbers. And his AGG is better.

vickingo_73 wrote:I remember a yellow number for AGG, for sure he deserves 82/83 there (as my original set) and as I said before he is FAR faster than the current, something like 82-85.

You can update with these suggestions...agg 79? no way! I've followed this guy for a long time in Lanus and Chacarita and I'm almost sure of it...also his mentality could go down as well his TW...which is terrible. He's that typical player who wants to dribble between 5 players and doesn't move too much to receive the ball...when he plays as WF he stacionates in the right side, waits for the ball and runs with it. Also I think that his BB is really underrated, he has a good strenght and his body is small but with force.
Top

Then tell me which values you suggest apart from TS 82, ACC 85 & AGG 83 for me to update. Do you agree with Christian about his post about his positions?
Top

Updated with your suggestions, thanks Victor.

I think that Shot Accuracy, Shot Technique and Free Kick Acuracy should ber improved, he is a really good kicker.
Top

Has he ever scored from a FK? or lately? Cause I don't remember him doing that, and in that case he has a good value in FKA still. Which is number of the FK style he has (similar to Roberto Carlos animation, let's say) in new-generation PES versions? It's FK style 3 in PES6, but I'm supposed to put from the latest version.
Top
Post Reply
25 posts