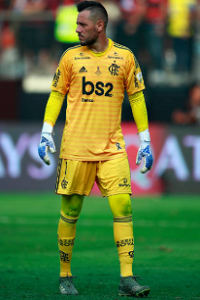 Made a little update. Thanks to RB7.
Editing La Liga...
Top

I still thinking we can raise his Response a bit. He is INCREDIBLE fast on this aspect. He can stop imposible shots thanks to this... I'm not sure, but I would put him on the orange's zone.
Editing La Liga...
Top

Markulur wrote:I still thinking we can raise his Response a bit. He is INCREDIBLE fast on this aspect. He can stop imposible shots thanks to this... I'm not sure, but I would put him on the orange's zone.

I'd also give him a boost in his speed stats, he's quicker off the line than this. I'd say a 72 for TS and a 74 for Acceleration would be justifiable.

Also, he needs a higher Jump value. The man can get decent height from his leaps, moreso than an 83 indicates. I personally have him at an 85 in this area, but we could discuss an 86

IMO,he needs to be the 3rd GK of Brazil NT in South Africa next year

Also his Agility should go up a bit. Did you see how good he's at defending consecutive shots? I believe a low 80's wouldn't be bad.
Top

I updated him with all the suggestions and some standards.

Only remains two things...
- Response: Probably I'm wrong, but I think that Diego (Alves) is better than the other Diego (López) in terms of Response and he is on 92... one over or the other under... Opinions?

- Jump: Gooner said something about 86... well Kameni is on 85 actually if I'm not wrong, and they jump on the same range IMO.
Editing La Liga...
Top

Can i suggest *PK Stopper? Rumors arrived down here in Italy about this guy with the best PKs percentage
of saving in the last 20 years of Liga.......50%. With Almeria getting at least 10 PKs against..
Saving Private Adrian

zuo wrote:Can i suggest *PK Stopper? Rumors arrived down here in Italy about this guy with the best PKs percentage
of saving in the last 20 years of Liga.......50%. With Almeria getting at least 10 PKs against..

This stadistics are true, from the last 12 penalties against Almeria, Diego Alves has stopped 6. In fact, the last match against Osasuna, Alves stopped one penalty kicked by Nekounam.
I agree with the inclusion of that star, this percentage is more than awesome.
One tricky history about him is that him prefer to choose Almeria rather than Lazio or Betis in 2007, when him arrive from the brazilian football, 'cause him believe that him would have better opportunities in Almeria rather the two other teams, teams with more history but more preassure to play there.

Edit: I've putted the star suggested by zuo, also I putted to him Condition 7, when he starts to play in Almeria have played 50 consecutive matches (without count NT U-23 matches in Pekin '08), the last season he lost 7 matches due a some injuries in his knee, this season he doesn't left any match, so for me enough arguments to update his condition.

This guy really can jump and has incredible reflexes, but I have a suggestion (or maybe a question).

How can we give to him his ability to play with feet? He has very good technical skills with his foot for beeing a goalkeeper. I have seen him playing against strikers with courage and very good "dribbling". The guy really knows how to play with feet.
Top

Alves, such a great perfomance, another one, against Atletico. He saved Almeria. Kun scores, but only after a great save of Alves against Reyes header. I think that Alves needs a slight rise in keeper skills, he is in the same level of Palop, I think he needs 87. He is with De Casillas,Gea one of the best keepers at this moment, he needs +1, at least, comparing him with De Gea level, he has more experience and he has been demostrating that he is enverywhere.. I think that consistency can be raised a 7 also?¿

I think Alves could be in a good club soon, but he needs to improve communication with his deffence and Air Balls.
Top

Santa baby, so hurry down the chimney tonight

Messi and co. made him cry.

How could we possibly represent the way he stops penalties like If they were shot by a 2 year old kid. God's shake.

Really good game of alves ... No words fot that may be we could increase the keeper skill +1 ??
Top

Really good game of alves ... No words fot that may be we could increase the keeper skill +1 ??

no, it's a great goalkeeper for his RES not by KS and is demonstrated when it stops shots up close and then when you shoot from a distance has many problems to catch the ball, I think even could have eye problems because it is inexplicable

, but I see very well as statistics as they are now

Well Kameni Is at 85 so I don't see why can't Diego be at something lke 86. He's more likely to parry but surely less than Kameni or Dudu Auate.

Why would Valencia sign him If they have César, Guaita and Moyá? I still can't understand It.