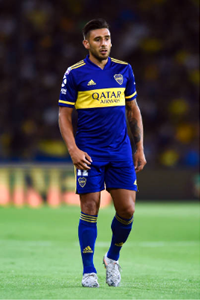 I think that he is more like the Tevez style
Orgullo, Pasión y Gloria
Top

He's an excellent player, i think he's like you did...

i'm not sure about the side, but all the other stat is just right, he has a lot of potential.

If you think well, I will update the first post

Well, it now looks like he is a Fiorentina target. So I will get to see how good he really is

I wonder how he will match up to Santana. Looking at the numbers he looks like a younger version of Santana...with better shooting. Could be a really good signing. Especially with the injury problems with Mutu, Santana, Machionni and Semioli's age. Salvio, Papa Waigo & Jovetic....can bring some new viola blood.
"The Recoba Effect"
Top

he is playing SS now. and his number is the 9

i believe he needs an improvement in his shooting in general. SP at least a few points.

ATT should be raisen 1 or 2 points, he moves very well in all the attack front looking for the best position.

DA could be raisen a little too.

Res is low compared to ladders, he should be sitting in 78 or 79

all this are little updates i think he deserves he is the main player for lanus, and he is probing to be at the level to handle it.
Top

jmg721 wrote:Looking at the numbers he looks like a younger version of Santana...with better shooting.

he has turned many goals for the number of games played and age, even when he not playing SS
Orgullo, Pasión y Gloria
Top

With similar or worse opportunities Blanco was able to put the ball on goal.
"The Recoba Effect"
Top

I thought he was faster..I watched him few times and he did nice runs and dribbles.
I would given him TS 85 ACC 86-87 DS 85-86
I don't live in Venezuela, but Venezuela lives in me
Descansa en paz, Roberto
Te echaré de menos
Top

He also plays as AMF doesn't he?
10th will be on Santiago Bernabéu...
Top

He never played as AM

He never played as AM

10th will be on Santiago Bernabéu...
Top

Well i'm from Argentina and i had seen all the matches of Salvio.... Since he play at the Sudamerican Sub20 last year he srprise me and I think that you can fix this:
more ATT like 80
more Long Pass Accuary like 82
more Technique like 85
and Free Kick Accuary like 77
And he plays in DC*, WF, AMF, SMF, DMF, SB
All in both sides, i know cause i had seen all he's matchs...
He started playing at DMF*.SMF and SB
And when he start to make goals he goes to DC*, WF and AMF
Top

I think that to answer my comment, may be someone who has seen the matches of SALVIO in LANUS,,, He has the FKs there and makes 1 goal and the other goes to the cross bar or to the keeper's hands... somes goes out of the field too but happens to every player... He has the striker inside and is always attacking, he deserves more of ATT... and the positions are those, he played as DMF, and SB in the Argentinian Sub-20 and the firsts matches in LANUS... When SALCEDO is transfer to RIVER he took his position and start to play as DC... if you don't know anything about SAVIO, just don't comment
Top

We don't need to add those positions where played in emergency, mate. We only put the positions he plays regularly.

IMO, he's well rated and his ATT value is high comparing to another players with same age of him,and also he's SS*. A lot of olders CF* have this value too.

And more one point. I know Salvio and I've already seen him play.