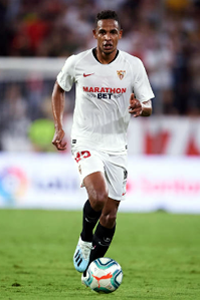 
I really love this player!
It can turn out to be Portuguese, I twist a little nose with this possibility (although the quality of the player is indisputable)... but yes, in the end who would win was the Portuguese National Team.

Looking at those video, I think DS and TS are too high. He never run with the ball, just play in one touch, his role his to intercept ball, then he just give a short passes, simple defensive works. And when he run a bit with the ball he just looks like a white DS or low green to me. Also TS doesn't look to need to be on yellow, he mostly use his burst and then will tackle every time the opponents continue his run on a long distance. It looks like he can follow him so tackle after a burst to be near of the opponents to tackle the ball and not the leg^^.

Looks like also he use mostly short passes, doesn't seems confident with the long ones. Agression is more a 60', just cosmetic but with a good resp he can be too much offensive in game if you give him a decent agression.

He's also a WFF 4, he looks like he has no body turn as he use his right foot for all, control, passes and turn, even in a bad positions wich need the use of the left.
By the way speaking about his body turn, not sure on the yellow value. Not sure also on yellow BC from those video.

Adrien thnx for posting your view.

Fernando sometimes takes his time when dribbling indeed, but when he wants he can be very fast and very strong on the ball. Your probably right that it should be lower, but i don't think we should decrease it masivly to a white DS. The same goes with TS. Which numbers do you suggest?

Agree with WFF. Maybe EP is slightly overrated. But imo his BC is very good for a DMF. I know if you watch for example the game against Viena he sometimes misjudge slightly soem balls, but also controls a lot of balls that an average DMF wouldn't. But maybe BC 79/80 would be better.
Sporting Clube de Portugal meu amor / Working on new sets and updating Liga Sagres
Top

I don't really have number for DS and TS, just think with this value it will be overpowered in game to compare with how he plays in real. Just want to have him playing the most realistic possible. May be in green.
They have eyes but cannot see; they have ears, but cannot hear; they have tongues, but cannot speak. They are like cattle.
Top

I was researching him last year and from what I've seen, I'd tend to agree with FernandoA13. He can keep quite nice speed on the ball when he wants, I saw a few displays with pretty nice DS, for a DMF at least.
Top

There is a vs video from last year, this one against PSG, will take it as an example.

The problem is that if he has space like this (video below) in game:

With this DS in game he will run with the ball, and will be fast enough to make difference, and in real he doesn't playing like this, he just make a simple short passes. In this 3 vs video he just never gone on run with the ball.

This one aren't impressive or like a yellow DS for me:

Rob, may be you speak about a run like this:

but I have still difficulties to see it like a yellow.

I don't have footage, but if someone knows a link to the previous Sporting-Porto match it would be great. Fernando run i think about 3 or 4 times straight through the middle with the ball and successfully. If he sees space he can and sometimes will run with the ball. But more often then not, in Portugal there isn't much space in the middle of the field, because a lot of clubs keep a lot of men behind the ball. What do you guys think of his TW? I believe it can be closer to yellows of maybe even yellow, he often acts like a deep-lying midfielder in the build up.
Sporting Clube de Portugal meu amor / Working on new sets and updating Liga Sagres
Top

i agree with yellow DS and TS. The anchor man card will make him static a lot of time and running fast with the ball in rare occasions (just like the real fernando)
Top New manchester city player
http://www.transfermarkt.co.uk/city-sign-fernando/view/news/164035
http://www.zerozero.pt/noticia.php?id=139429
http://desporto.sapo.pt/futebol/primeira_liga/artigo/2014/06/25/fc-porto-vende-fernando-ao-manchester-city-por-15-milh-es-de-euros
http://www.maisfutebol.iol.pt/transferencias-fc-porto-fernando-manchester-city-topnews/53ab16c10cf28cd897b5f9db.html
http://www.mirror.co.uk/sport/football/transfer-news/manchester-city-transfer-news-fernando-3764491
http://www.china.org.cn/world/Off_the_Wire/2014-06/26/content_32783877.htm
Hi, I work at Transfermarkt as a Datascout in Portugal and I feel like you need someone like me to update the data in Portuguese professional competitions.
Top

Tonight I put two times that he is new City player but after I see that post and that two times my messages are delete, reason?
Top

Forza-Málaga wrote:Tonight I put two times that he is new City player but after I see that post and that two times my messages are delete, reason?

Maybe because none of your sources were official??
Anyway, here's an official announcement:

Forza-Málaga wrote:Tonight I put two times that he is new City player but after I see that post and that two times my messages are delete, reason?

Maybe because none of your sources were official??
Anyway, here's an official announcement:
http://www.mcfc.co.uk/News/Team-news/2014/June/City-sign-Fernando

I put here because I see on twitter the ad of Porto, but I can't put images here. Next time I only put here a signing when I have a link.
Top

mod, fernando has used the shirt number #6, based on goal.com id

His EP has to go down, he is not agile at all, actually i think he is even less agile than Fernandinho. About his DS, im not sure, with 76-77 EP it will be already a little harder to dribble with him.
Top
Post Reply
58 posts