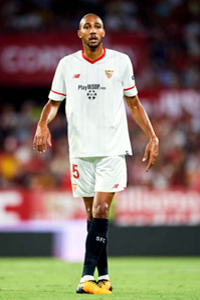 78 for BB is akwardly low for a player called the next Patrick Vieira and standing 190 centimetres tall...
Buon compleanno, il pibe d'oro.
Top

I see what you mean but that was intentional. Whether I pitched it correctly is debatable (hence why I wasn't going to post the stats till i'd seen more of him). He is tall but isn't always able to use his body to protect the ball all that well; he probably needs to fill out a bit and I didn't want to make him too strong taking his height into account. His BB is currently the same as Crouch; I suppose a couple of points increase isn't too far fetched but mch more than that would be excessive at the moment.
Top

He is in need of an update.

Big J wrote:He is in need of an update.

Agree. If and when I have time I'll see what I can come up with
"DEBT IS THE ROAD TO RUIN" David Gill August 2004

Big J wrote:He is in need of an update.

Agree. If and when I have time I'll see what I can come up with

Thats great I would like to see what you come up with. Your Rooney set is pretty good.
Top

Great stats Jez, this guy has loads of talent and I am looking forward to see how he improves in the future.
Top

Cheers, I've tried to not go overboard (as you'll know if you read the description) but I'm excited to see him next year too. He's being linked with Arsenal already but I can't see it being a genuine interest at the moment

I'd like to know owenrilla's thoughts also.
Alf Ramsey: "I'll be watching you for the first 45 minutes and if you don't work harder I'll pull you off at halftime."
Rodney Marsh: "Crikey Alf, at Manchester City all we get is an orange and a cup of tea."
Top

You mean my thoughts?
Top

I already know your thoughts

There isn't much I would argue with really. It generally seems a decent update with appropriate changes to areas I wasn't sure on so early in the season. The balance change, for example, is about right since he has got used to playing in this league and has learnt to use his strength more. The speed changes were also necessary as it has become clear over the season that he can cover ground at a higher pace than I initially thought.

The only slight fiddling I might have been tempted to do relate to the Stamina, Response and Shot Power. I might have put the stamina a point or so lower than the update based on the impression that by about 2/3 through the season he looked as if he could do with a bit of a rest. That may be a bit harsh or irrelevant but it is from a cautious viewpoint. I might have put the Response to the 80 mentioned in the description but don't have a problem as it is. Shot Power, I am not convinced about. I would have actually gone for a couple of points lower than 84 as there are a few players on the ladders that I don't think should be lower; Graham Alexander (82) and Segundo Castillo (83) to name a couple but there aren't that many shots from N'Zonzi I can think of for comparison (apart from hitting the post against West Ham, I think) despite having seen every home match live.

Just to talk in general about him as a player, I think there is more to come from N'Zonzi in certain areas. If he had a bit more freedom (if Grella could stay fit for more than 5 minutes it would help) I think he could add more goals to his game as I get the impression he has the shooting ability but isn't in a position to use it often enough. His passing is generally fairly simple and on occasions when further up the pitch he doesn't always seem to know what to do in terms of a final ball but he has shown glimpses that suggest his long passing is pretty good and hopefully with the confidence of this season behind him, we will see more of this. I would also hope for a bit more of an aerial threat from set pieces. While he has largely been in a protective role this season I think he has the potential to be a very good box-to-box player.
Top

He seems to be playing a more advanced role this year which might make some of these stats a bit redundant now. I havn't watched a full Blackburn game yet though so I can't really comment. Has anyone seen much of him yet this season?
"DEBT IS THE ROAD TO RUIN" David Gill August 2004

Still needs moving when someone has time.

Think he deserves higher defense then that.