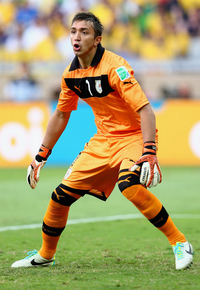 No one of the mods like to confirm these values.
Top I don't really know if I am right, but Muslera really needs any kind of update. Sorry, but he is that bad with his current stats. IMO he is too worse in the game. He is not such a bad keeper in reality.
I know about his mistake against Spain. http://youtu.be/hqFki2hXRbk
That was showing him in a very stupid situation, but it is not usual for him.
In CL or in the Turkish League he is much better than in PES with his current stats.
Maybe anyone got an idea for any kind of update???
....I'm not Kloppo....
Top

He can give very accurate long passes with his great gk punting technique.
Top

Muslera is a really good keeper but not a great one , his best ability seems is his orange reaction , keepers skills and his handling dont seems world class to me thats why keeper skills 84 or 85 by most is fair enough and may his defence could be 86 , his reactions are nearly world class so 91 is a good number but i personally think he lacks alot from keeping skills and body balance , just secound tear , i mean the secound goal of Schalke was a must get for a great keeper. suggesting defence 86 , keeper skills 85 and balance 83.
Top

UncleDemon wrote:... i mean the secound goal of Schalke was a must get for a great keeper.

A must get? Don't know, how a keeper could get such a ball, when someone crashes with his whole body into him?
IMO it was a foul and not question of his goal keeping skills.

oldfirm wrote:After watching him this season. IMO he deserves GKS 86.

viewtopic.php?t=27906 De Gea is rated better than Muslera. Where is the camera ?
Top

I've made an update on him, set was still old standards. I've been maybe somehow generous with his GKS, but considering his pretty average def it can stay.
Top

Surly Muslera must get a higher value for jump, he saved many shots going towards top corner, he's been best keeper in the league for 4 years clearly better then the rest.....he stopped a free kick going straight into top corner over the wall month ago that no one could believe

Defence can be raised by 1 or 2 points, also DA 54 is far to low for Muslera, his very good with his feet by far the best in the league. DA 70 would be much fairer
Top

gala2000 wrote:Defence can be raised by 1 or 2 points, also DA 54 is far to low for Muslera, his very good with his feet by far the best in the league. DA 70 would be much fairer

70 will be too high for a GK, if you look at the ladder the highest in the league is 60 which belongs to Esteban Alvarado. Please rate accordingly
Top

Refelxes: 94 He is up there with the best of them with his cat like reflexes

Besides that he doesn't have a set for his Lazio days, and this is the only thread about him.

I want to highlight this about his old days.

Wft with his issues facing these kind of shoots.