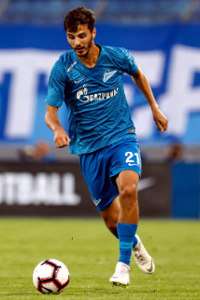 This set is very underrated. There were prior sets made on other parts of the forum that should be looked at.
Top

There's one I found with much higher values but it's from 4 years ago.

I'd like to see recent suggestions as well as the reasoning/examples behind higher values.
Everyone knew it was impossible. Then came along a fool who didn't know it, and he did it.
Top KeyserSoze wrote:This is a raw set for leading playmaker Aleksandr Erokhin (Rostov). Tbh, he really impressed me against Ajax in both games. Despite his massive body frame and his lack of pace and agility, he's more than competent showing some class as a playmaker. Very similar to Orlando Engelaar if you ask me.

Above are 2 sets that were published 3.5 years ago by different users - Sergio1990 and KeyserSoze. Erokhin reminds me of a universal player, but by half. In all his positions, he lacks basic football qualities: for AMF - pass accuracy, for CMF - defensive skills, for SMF - starting speed, for centre forward - shot accuracy. There is little sense in this versatility, but it saves him that he is a Russian and does not fall under the limit on foreign players.
Top

https://i.imgur.com/JVPmC02.png here is a picture for him, definitely on my radar to get down since Keyser has asked me about him before. Short passing I have seen definitely solid green stuff from him. Set definitely seems really low and just bland. Strength is absolutely a yellow value and I think the guy has a motor and a high stamina value. Technique as well hasn't struck me as white. IDK, think we will need to just make this into a proper set over time with viewing. Think the attack and defense values are fine since as Twix noted he is a sort of jack of all master of none player who is flawed at every position but versatile enough to handle every position.
Top

I believe i posted a set for this player somewhere here but i cant find it, it was based on Keyzer + Sergio sets with some changes, i agree with OKguy notes but i also find some things missing.
I remember this guy being very supportive and moving into empty spaces with some frequency to deserve at least 80s tw, he covers a lot of ground as he said and a high amount of his work is by giving support.
I also remember a high aggression and a better value for header, as this guy was used as an extra-attacker and moving into the area for aerial chances and also making runs specially on the counter attack into the box, his header looked decent and its his main way of scoring goals like this:
https://youtu.be/xsYcJ9PCUn4
1-touch passes were his trademarks, moving into empty space --> easy 1 touch pass with good quality, he was a great passer and capable of sending aerial and ground balls into empty spaces.
His shot looked really strong with either foot.
He is big, his acceleration is really bad but he can hit decent final speed, and he isnt bad running with the ball either, i fell his technique to be much better than this, and his DA isnt that bad either, he is at least closer to keyzer values.
I agree with the low defence, his contribution is really low defensively, he can cover spaces but he cant be effective only using his response to something, his low agility also doesnt help him either, and his tackling is unremarkable but his offensive contribution based on last seasons may warrant a higher atk? he is a threat when he is on offensive positions.

Some things may be outdated so i leave the rest to OKguy and others.
Top

I agree with Elivelton's suggestions about increasing attack, aggression, and teamwork. In my set, which is located in the next topic, I pointed out higher attacking stats, which more widely reveal Erokhin, as a player who can break into the penalty area at the right time - no wonder Aleksandr sometimes comes off the bench on the field in those situations when Zenit wants to snatch a victory, in order to have a powerful attacking trio Dzyuba-Azmoun-Erokhin (not counting the wings). But, unfortunately, these valuable qualities often become invisible - he is a good player, of course, but he is an ordinary hard worker without any outstanding qualities.