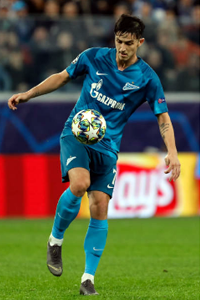 He is definitely faster than this. All it takes is to watch entire game of Zenit and it will be noticed for sure. Or just watch games against Leipzig in CL from this season.

This is a latest video of Azmoun performances. It highlights his strengths well, and even the person that made this compilation lists Azmoun acceleration, speed and jump as his main strengths. In my opinion, this current set is pretty accurate, but acceleration and speed should be at least few points higher. I think that Azmoun is quicker than lets say Chalov, in both top speed and acceleration. I even think that Azmouns acceleration is pretty damn good, and it warrants a big boost for sure.

For instance, at 3:13, guy running at full speed to try and catch Azmoun (who was running with the ball and touched ball before that, so wasn't at his full speed) is Mathias Normann, and even he couldn't catch him (Normann top speed in database is 83)

At 3:34, he uses the space excellently and runs away from Ivan Miladinovic who is running at him at full speed. Azmoun even touches ball 5 times before he was fouled and penalty was awarded.

9:00 mark again shows his acceleration and quick movements to get to the ball first and runaway with it.

Even when he played in Rubin or in NT, his speed was more evident, because that teams played counter. Now in Zenit, it is tougher to notice his speed because Zenit plays more offensively and Azmoun more freedom upfront. But still, just watch a few games and you will see that speed and acceleration is one of his main strengths which he uses to get free.

Also, Shirt Name should be: SERDAR and not SARDAR.

Interesting stats from last season game between Zenit and Anzhi that again shows what is one of the best attributes of Azmoun. His top measured speed from that game was just a bit behind Robert Mak, and Mak in database has 90 for speed and 84 acceleration. This again shows Azmoun speed and acceleration in database is nowhere near accurate. 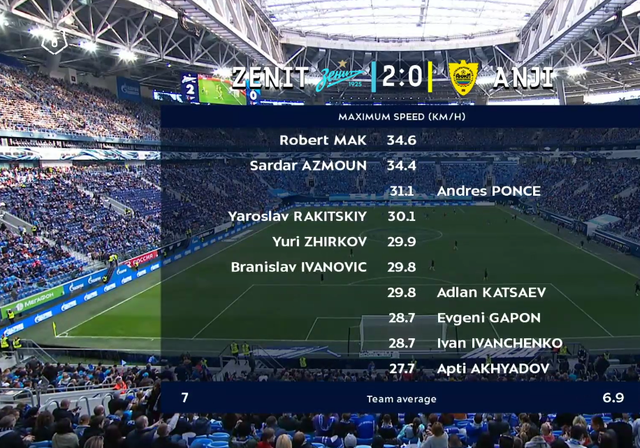 Great counter from Zenit and fantastic move from Azmoun and assist to Dzyuba. Again, he showcased his top speed and acceleration. He should be 4-5 points higher for sure.