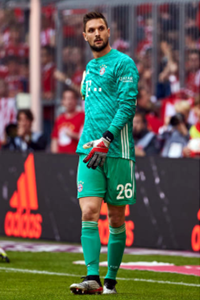 With this stats Ulreich is really underrated! When he played for Stuttgart which was 11 times since 2007 when he played 8 times in a row as replacement for Raphael Schäfer when he had a bad bad season, Ulreich showed very good reflexes, agility and handling for such a young keeper. My guess is he will be Lehmann's successor in 2010 oder 2011.

Keeper Skills 80? Never. He's a young promising goalkeeper but he hasn't this class. I think 77 or 78 is ok but not more. And why he schould get Aggression 60?
Top

Assassin wrote:Keeper Skills 80? Never. He's a young promising goalkeeper but he hasn't this class. I think 77 or 78 is ok but not more. And why he schould get Aggression 60?

I saw Ulreich play 8 or 9 times from his 11 Bundesliga-appearances and he seemed very confident for an 18 year old at that time. He made some minor mistakes but also a few amazing saves that prevented Stuttgart from losing.
80 would put him on par with Florian Fromlowitz and 1 point lower than Ralf Fährmann, regarding his young age I would agree with you that 80 is a bit too much but to be honest less than 79 points in Keeper skills I would call underrated.

And the raise in Aggression would reflect his style of playing for he doesn't merely stick to the line but tries to outrun long passes and crosses. Apart from that I guess there are barely Goalkeepers with such a low Aggression value out there.
Top

I agree with KS=80 and a slightly higher AGG. They seem to plan taking him as a replacement after Lehmann will be retired... 80 would put him on the right stage of the ladder.
Top

as a stuttgart supporter, I watched him play about five times this season and agree with his current stats. he is a great 1 on 1 stopper. if he will continue like that, I would suggest to give him the 1 on 1 keeper card...but he has some troubles with crosses flying through his box...
Top

In my opinion DEF is 1 point to high, Ulreich still improves in that area but he isn't as safe a shot-stopper yet as a 84 value would make him. On the other hand his response needs to be a bit higher as well as his agility: Since he became Stuttgart's #1 Ulreich improves steadily, his technique becomes better and slowly he masters to be "the king of his box" by catching crosses or giving orders to his defense but what always have been Sven's strongest point were his quick reactions on the line, he showed more double saves than any other goalkeeper in the Bundesliga and is among the top 3 keepers in terms of deflected shots with Marc-André Ter Stegen and Roman Weidenfeller.

Regarding his reactions I see him similar to Thomas Kraft and Ron-Robert Zieler, I'd like to see Ulreich's RES on 88, 2 points above Kraft (1 above Zieler) and his AGI on 84, 1 point below Kraft and on par with Zieler. Watching him play the current AGI value is much too low.
Top

response isn´t just the point how quick he acts on the line, it`s also how fast he felt a decision. I´ve explained it in any thread sometinmes, that GK values never work alone. But there will be a big GK update between Christmas and new year. so I will not do any GK update for now. Cause I want to do all in a row to have the right balance for all
Don't bother just to be better than your contemporaries or predecessors. Try to be better than yourself
Top

For me Ulreich was the best keeper of the Bundesliga's first round in 2011/2012 season slightly in front of Ter Stegen and Leno. I'm pretty sure without him Stuttgart would struggle with Freiburg for 17th place^^
Top

I dont get this:

is this mistake or i missed something?
Top

slyz wrote:I dont get this:

is this mistake or i missed something?

It's a mistake caused by the "PSD Editor". It happens pretty often so I recommend to pay attention to the stars/cards when updating players in your OF.

I think he need Keeper Skills= 85-86
Sorry. I try to explain my ideas with bad English:)
WE9:LE is the Best!
Top

I'll go for something like 84 for KS. Also I think he needs lower agility for sure, mid-lower greens imo. Hope s-cobar update soon.
...U dared to enter my world...

agree with Kruger about KS, DEF could easily be 1 or 2 points higher though, he showed so many double saves last season, very quick to get back on his feet and constantly improving his handling, self confidence and calmness.
Top

does his jump ability need increase too?
Sorry. I try to explain my ideas with bad English:)
WE9:LE is the Best!
Top

I feel we should change DEF and KS for Ulreich, he's definitely stronger in parrying balls than he's is when it comes to position himself properly. He often is caught out of position lately. Just look at the goal De Bruyne scored against him tonight.
Top
Post Reply
30 posts