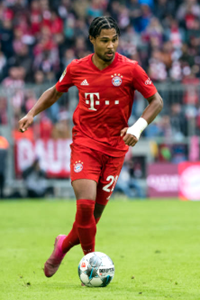 thanks for the set, but he is German, not English.

Haven't seen enough of him to comment on most things, but one thing I'm sure of is that he is strong. He's a barrel-chested little player, and every time I've seen him he has shown really good strength. I'd say he's a yellows here already. I remember him holding off Pieters pretty comfortably against Stoke for instance.
Top

He shows good SPS from time to time, I think an increase to a low green value would be fitting for him. Also his pace is decent (i think the current TS value is okay, he might even deserve an increase in the near future) but i just can't see him on a orange ACC value, for me he is an 87 at best.
The goalkeeper isn't another one, he is THE number one!
Top

He's been fantastic on the olympics so far. I'm hoping Arsene will give him a chance to prove himself this season, because he'd be a very interesting option for Arsenal. Could chip in with a few goals too.
The goalkeeper isn't another one, he is THE number one!
Top

Why the hell they decided to get rid of him! nonsense!
Bloody Curse!
Top

Brahms wrote:Why the hell they decided to get rid of him! nonsense!

He had one year left on his contract & didn't want to extend as Wenger couldn't guarantee him first team football.
Top

so has he played anything? how is he doing? i'm still butthurt by his sale
Bloody Curse!
Top

playing extremely well and has been Bremen's best player all season. Received his first national team call up and bagged 3 goals on his debut (against San Marino albeit).

I would look to increase his shot power to at least 82 and up his dribbling/technique a bit as well.
Top

He's playing mostly as AM/CM lately, but he becomes rather useless as such. He doesn't give proper defensive support and seems to be completely lost playing deeper. Today against Bayern, Junuzovic had to fill the role Gnabry failed to perform in the midfield, mixing playmaking and aiding Delaney in defensive phase.

I think Gnabry has more potential as a hole AM/SS player, but Nouri (Bremen manager) opts to have Kruse and Pizarro upfront... Theorically an fairly good partnership, but both of them are ghosts if not feeded properly.
"Willy Wanda is Chinese!!!"
Top

He made a decent game as CM/AM at last, at Mainz and scoring the opener. We need to add those two positions; it is either Gnabry as AM in front of Junuzovic/Delaney, or the Dane playing as lone holding DM and Gnabry/Junuzovic as CM.
"Willy Wanda is Chinese!!!"
Top

Given his last two great performances as hole SS, I hope he won't be playing as CM anymore. Bremen needs some flair upfront at times, and Gnabry is better at providing that than either Kruse or Pizarro.
"Willy Wanda is Chinese!!!"
Top

He really needs a good update ! Some stats like ATT , STA , DS , SA , TEC and Attacking Prowess are very underrated in this set and also FORM should go up for sure

I KNEW he left Arsenal because of Bayern. They had him play for Bremen for a season, but the plan was always for him to go to Bayern in the end.
The goalkeeper isn't another one, he is THE number one!
Top

Viyut wrote:I KNEW he left Arsenal because of Bayern. They had him play for Bremen for a season, but the plan was always for him to go to Bayern in the end.

I seriously have a bad vibe about this move. Not because of lack of talent, but his attitude is really disgraceful. He had at Bremen all the first team football chances he lacked in Premier League. He was having a positive impact for the team, even when they were struggling in the 1st half of the season. He remained the same when Bremen had a drastical boost of form since February.

But then, a mild injury came into his path. He was sent to the bench for 3-4 matches after he came back from that injury. But his mental approach also became weird, showing lack of enthusiasm and involment in the game despite Bremen was challenging for a UEFA Europa League spot at that moment.

That said, it is quite obvious that Gnabry forced his way to leave Werder Bremen and that he didn't want to remain at the club despite giving him the chances he never received at Arsenal. That explains why Bremen staff lowered his price tag. They signed him for just around €6 M, but a year later he was sold to Bayern for a mere ~ €8 M, leading for a rather small profit of €2 M.

I know Robben and Ribéry won't last for long at Bayern as they are already reaching mid 30s, but that does not mean that Gnabry will have a 1st team spot for granted in mid-term.
"Willy Wanda is Chinese!!!"
Top

I bet Robben can still give top level performances for another 2 years at least. Ribery is done tho.