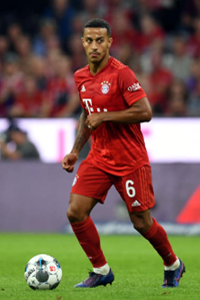 No, it's a very good question and something I had qualms with updating, and something I felt I should mention. Hes still very much so more of a lpa > spa player imo. When he wants to really make the hard distrubution passes, it's his tendecy to play them aerially, rather than grounded. I think thats very telling, he is perfectly comfortable with his LPA and falls back on it when hes not confident to make a pass with his SPA. That being said, the thing is, is that he really doesn't try to be very incisive with with his aerial passing, he has the accuracy but he just doesn't use it to open games... I think for what he does with it, 88 is really hitting the cap. But the thing is for SPA, though he is a better long passer (imo), he has that xavi/iniesta grounded through ball game instilled in him... do he doesn't use it much either, he can open up games by playing those long range grounded through balls... and these are really difficult passes and he shows great accuracy on them, so I believe a value like this is deserved. So it's really just the case of him being incisive via spa, rather than lpa, though appearing to be much more comfortable with his lpa.
I've also given him a very low attack, because he really acts as the build up guy and rarely goes for those killer balls... I think this is something to do with peps orders.. will be very interesting to see what happens to him when pep leaves...might take him to city.
Top

Thiago has really improved his jump a lot and shows it in every match . It is very clear when you see him playing so for me his JUMP can go some points up

mr.Boss wrote:Thiago has really improved his jump a lot and shows it in every match . It is very clear when you see him playing so for me his JUMP can go some points up

When I suggested a higher jump I thought maybe he wasn't so consistent or needs this, maybe now he'a worthy of the yellow zone.

Imo his defense is ok, maybe even slightly higher than he needs since his defensive participation by closing spaces and compacting with the team (zone marking) is very good, but being good at tackle is another history (probaly a higher defense would do it)

As well as response, Thiago is well connected in times where a quick reading of the game is needed, but not as aggressive as a higher response can transform to him.
Top

from the start at barca he showed good jumping and heading ability, but didn't opt to go for aerial duels that much, defensively he did improve a ton from barca days
Top

Updated jump to 82, slightly raised SA (he's always been on green accuracy, perhaps even higher than this, too bad he doesn't get to display it more often) and slightly raised header. I'm not sure his header is better than foot-accuracy so I kept it at the similar level. Possibly both of these are higher, but to me it's a question of reliability of impressions he leaves since this isn't the job he gets involved in regularly, cause it's not about 2 points of difference, but a fair dose of upgrade for and current moderate shooting stats he is stretched between. I'm talking near yellow SA and yellow ST, header also somewhere in that range.
Top

why in the fuck did I lower his response, i gave him those values years ago because he always displayed far higher defensive capability than others in his mould, just gave into the pier pressure bullshit and took away from this sets realism
Top

After this debate about defense and response I watched the games against the Atleti, Wolfsburg, Darmstadt and RB Leipizing.
Confess that I had another vision of his defensive abilities, always saw him as a great player in the matter of intercepting passes and squandering the spaces but even on the tackle he impressed me. I checked some numbers and even though I do not like to judge by them alone, 4.5 interceptions and 2.8 correct tackles (best of the league) per game is very, very significant.
Maybe it wouldnt be madness an increase in defense
and response but I really dont know how to reflect the interceptions in the game.

It may just be a wrong impression but increasing the response would make him a little more aggressive than he really is, and IMO his interceptions have a lot of influence from his sense of positioning, concentration, a bit os his natural agression in defense yes but strengthened by the tactics, and essence of Bayern, where with the organization married to these other factors allows him to have "this" aggressiveness. Also with this tw think that a very high number in response makes it seem unrealistic.

Edit: Currently he should have more defense than in the Barcelona season, the only question is whether he is underrated here or overrated in the classic set.
Top

He should have DMF as optional position.
Top

I'm back on this again, he finished the season starting as DMF 20 times, 13 as a CMF, none as a AMF.
He's becoming more and more like a 'Build Up' type of player, Niko Kovac most used formation was a 4-2-3-1 with Thiago as a DMF and Goretzka as a CMF: 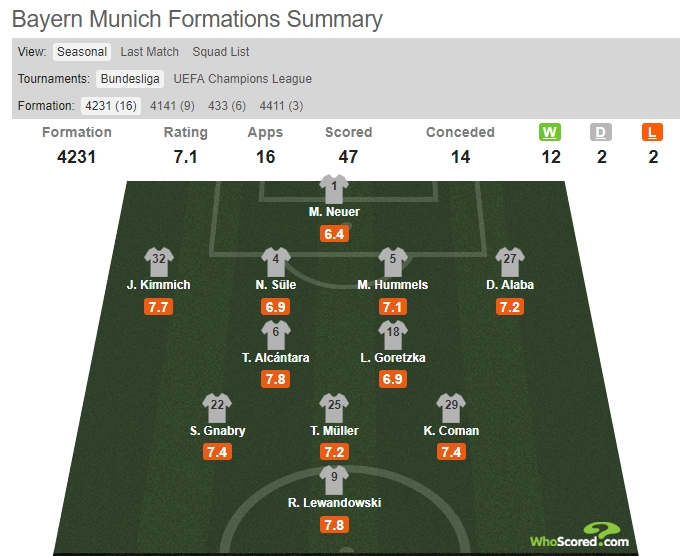 In the build up he goes between the CB's to receive the ball and trigger the attack, while when Bayern is defending the team switch to 4-3-3 with Thiago as a pivot:

And when defending long balls he enters in the first defensive line:

So I suggest again to add DMF as his secondary position and removing AMF.
Also, I dunno why his BW was decreased, he's a very good tackler in fact, 75 (the previous value) would do just fine imo. 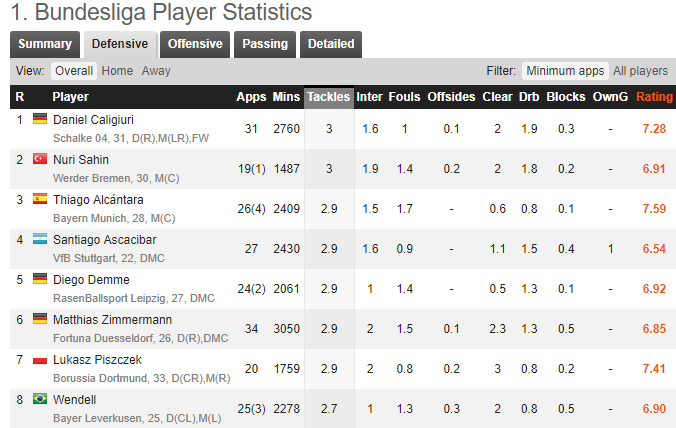 Third most tackles per match in the league, while he's also the one who was dribbled past the less: 0.8 dribbled past against Caligiuri's 1.9, Sahin's 1.8 and Ascacibar's 1.5 for example.
'Build Up' as playing style is also one option, only triggers as a DMF anyway, and in case of PES 2019 could go for 'Orchestrator.
Top

Great, any suggestion on the att/def ratio? I can definitely see his def go up by a couple of points.

Albo7 wrote:Great, any suggestion on the att/def ratio? I can definitely see his def go up by a couple of points.

At most I see him with 69 or 70 in def, wouldn't touch his att, he's like a more reactive version of Pjanic tbh
Top

hes always shown really ridiculosly clean ST attempts throughout his carrer. I rember fifa giviving him 50 for volleys and 82 myself, a raise is something that he could really do with.
Top

No, they weren't
Top

Thanks, must've been my bad.
Top

Should absolutely have AM as an option.

And his ATT should drop. His TW as well. He's a super duper talent playing in a huge team that's too big for what's around them. And he's mostly an over passer. Even his goal came from him being desperate to pass and playing against a nothing team.
Top
Post Reply
437 posts