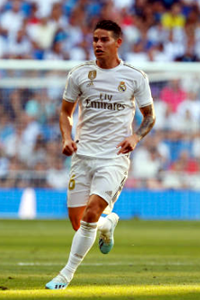 James is not fully exploited at Madrid. he can't play his best football on the left wing. Ancelotti needed a system to accomodate Ronaldo who does not like to track back and defend. He then figured a flat 4-4-2 system was the solution. The problem here is that you waste your number 10 in a wide left role, and you isolate your best player (Ronaldo) upfront.
Against a defensive team like Juve, you need a number 10 that will link the midfield and the attack, because crosses from the wing won't work. It is a shame that Carlo didnt realise that. In the first leg, it didnt work, he didnt get the clue, and repeated the same tactic in the second leg.

I hope Ancelotti leaves, and I hope the new coach will bring back the 4-2-3-1 with James as a no 10. He has got great touch, great vision, and defenders know what to expect when they clear the ball centrally.

Regarding his numbers, I would say that his speed and BB values seem a little generous, whilst his passing accuracy could be higher.
"Remember to be polite"
Top

Draxler wrote:Regarding his numbers, I would say that his speed and BB values seem a little generous, whilst his passing accuracy could be higher.

Indeed, I think Konami gave him high greens in both and is basically correct.
Top

Totally agree... also his DA has to go down to 91, there's no way he is on the same level as Coutinho.
Top

true when it comes to his dribling he can be a 90 -91 .... hes crossing in the other hand is always spot on and hes beeing consistant for years.... he can be the same or close to dimaria imo
Top

Both great goals.
Anyway, i still don't see his DA this high, and i need some explanation about his BB. He is strong for his size, for sure, but i don't see him above Cazorla or Silva, for example. Same goes for TS.
Top

The set was made after the WC where he was the best player. I don't know how he played in his first season at Madrid, but at least give him some time.

All I can say his that the BB value was well deserved, he always be strong on physical pressure while dribbling. Player was pushing him or putting arms on his shoulders, but he always stayed on his feet. I don't know how to explain it more. But no doubt that he was yellow.
They have eyes but cannot see; they have ears, but cannot hear; they have tongues, but cannot speak. They are like cattle.
Top

I feel it's too high as well. Can't say I'm convinced with such value.

Really , why he doesn't have *1-Touch Shot

I understand how difficult must be to creat a set but in this case the stats are not showing what is really James' in real game. There are several points of view that can generate debates but there are some values ​​completely wrong.


First on the technical side I see a generous number for DA. Of course he is a skilled player and he can keep the ball next to his feet during the dribble but he doesn't need such higher number as 94. Also nearing the red zone and above various players in the ladder indicate to how much is misjudged, overpower. I see his DA close or equal to his the BC , which does not happen in this set because DA is even higher. Particularly I prefer DA 91 and 89 BC or even 90 in booth.

I like the value of the SPA , replicate very well his style and precision but needs to be below his LPA. The fact that LPA should be even higher , his aereal balls are very dangerous, much consistant , dangerous and accurate than his short passes. Something like 89-90 is quite plausible to replicate his capability without overpower him.

The kicking values ​​are very low , always impressed me more than his dribbles or passes . ST is absurdly low , certainly is the best element in the composition of his kicks. Comparing him with Kroos and Yaya Toure , I haven't seen him so far from them in terms of precision , he has a very good accuracy in his shoots. The combination 82 SA + 84-85 SP + 84-85 ST can replicate very well how dangerous and diverse he is on that atributtd.
PK + SW should also be higher but do not know an exact value and even a good balance that can convey this in the game.
I see him little better in areal game , but isn't a real essence of his game so doesn't need a much bigger increase.


EP , TS , ACC , DS , BB are absurdly high. He doesn't uses the explosion , speed, or strength on the essence of his game. He is a technical player but not this good physically . Why he needs this high numbes if he isn' so explosive, fast , agile or strong? The idea of ​​being complete player is good but the execution (the numbers ) is fucking generous . Try something like 79 TS + 79 ACC + 82 DS + 79 BB + 83 EP and see how much more like James Rodrigues in real life. Still decently fast, strong and agile but not overrrated. With these actual number he can drible every player , um every situation. Of course that isn't the case.


76 in TEN ? He doesn't showing this for a long time , he is very lazy ... fucking lazy , really annoying. White zone for sure. On the other hand think that the STA may be a little better (83).
This balance was very good to demonstrate that he has energy to move around and participate in offensive transitions and even defensive of Madrid. Anyway without some tenacity , disappearing several times and hiding in adverse moments.
Form needs to be reduced , has no consistency.

agree with the idea that he's too explosive/good of a dribbler with these stats, he just retains the ball well. lower form as well imo
Top

scara wrote:agree with the idea that he's too explosive/good of a dribbler with these stats, he just retains the ball well. lower form as well imo

Exactly , he "just" retains the ball. Don't think that he is this good in change directions or putting speed in his dribles.
Top

Even still, his close control is not that good as bordering the red zone. Verratti's DA is certainly better than James'.
Verratti is heavily better than James when it comes to command the attack on the ball. Maybe the Italian is heavily slower and not as agile as James, but Verratti still excels much more when keeping the ball as close to his feet as possible. He's not just into protecting the ball and perfoming the Tactical Dribble as often as James; he can also get past some players just using pure DA (and DS/EP to a lesser extent).
toadd's suggest of DA 91 makes more sense imho.
I'm not sure which values for DS or EP would be appropiate for him, but I wouldn't blame if they were lowered 1 or 2 points.
"Willy Wanda is Chinese!!!"
Top

I think EP is fair rated, I don't see him under Isco.
Well, I wrote the same about James's DA like a year ago. Also high green TS would be better for him.
I think greens for BB would be too much of a downgrade. He has some strenght and knows how to stay on his feet well, don't see him under Lamela. Maybe not as strong as 83, but 80 would be good.
87 LPA as max, I really don't see him over Ozil or Coutinho.
Top

KeyserSoze wrote:Even still, his close control is not that good as bordering the red zone. Verratti's DA is certainly better than James'.
Verratti is heavily better than James when it comes to command the attack on the ball. Maybe the Italian is heavily slower and not as agile as James, but Verratti still excels much more when keeping the ball as close to his feet as possible. He's not just into protecting the ball and perfoming the Tactical Dribble as often as James; he can also get past some players just using pure DA (and DS/EP to a lesser extent).
toadd's suggest of DA 91 makes more sense imho.
I'm not sure which values for DS or EP would be appropiate for him, but I wouldn't blame if they were lowered 1 or 2 points.

Exaclty Keyser , exactly this point about DA. I don't see as consistent and even skilled to keep the next ball of the feet for beeing 1 point below Red Zone.

He has good agility but nothing that high like 86. With a number like this seems he always try or even can change direction so easily in almost all situations as something essential in his dribble style isn't real . If you put the DA in 91 + EP 83-84 and speed skills on the high green zone or low yellow zone you can very well replicate the style of James. Can well keep the ball close to his feet with a good alternative to change direction or explosion but nothing loud or unpredictable as it were essential in his game.
Nothing as unpredictable or that he do constantly.
Top

Well, there's no way he can be faster than Mahrez.
Top

On this date, He's speed has decreased. He has great ball technique, but not that fast and Hi's Body balance is lower than 83. Benitez screwed Him for sure, I Hope Zidane get Him on the crack line again, He is one of my favorite player's, has a great fineness at short passes, outstanding teamwork, killer freekick and a great distances shooter.
Top

Against Chile he seems very slow . I think in the last maches he plays standing mode . I mean he dosen't run so match . So that his speed must be decreased . Coutinho 79 and he is 81. Without doupt Coutinho is faster than James and runs more than him. Or you should add Coutinho'speed
Top
Post Reply
159 posts