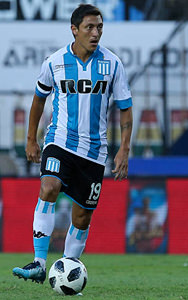 could you explain why:

low teamwork
I'm against you
Top

I think I can explain those. He is a very strange player, one year and a half he was a great player with great future, a trully dangerous SM. But sudenly (got a model as a girlfriend) he started playing AWFULLY, and since then he couldn't get back to his level.

Mentality: My first paragraph shows some of this. In this stat he is similar to Ariel Ortega.

Team work: He can't be anymore in any colective play, he just grabs the ball and loose it.

I think he could deserve Middle Shooting, but not passing.

i agree with that:

and the average condition: 6
Top

edit: yes, he is in jaguares now

Agree with consistency 4. And please move

Now is the Monterrey

That header value is a shame.
Farts stinks like a mother fucker!
Top

His TECH and DA are a little bit overrated. I suggest reduce by 2 points each.
Farts stinks like a mother fucker!
Top

Thats whai I said in other post, his header value is a shame.

I agree (Same Tech than Mouche and same DA than Sanchez Prette). Also If you drop the others (mentality, SPA and consistency) by 2 I will agree

I think 82-83 is fine for his dribble/tech. He is quite good with the ball and keeps it close.
Top

the current values are good IMO, not too sure about cards, but Talisman HAVE to get rid off

To be honest I dont think he deserves free roaming here at monterrey to me he hasnt proven he still deserves it what does anyone think? It needs to be removed
"Only the strongest survive"

julgui wrote:I can send my suggestions?

"Only the strongest survive"

I have the luck to see him play often and know all his time in the Boca. I think this set with some changes to match well.

Injury Tolerance: B
Foot: L
Side: B

pd: A query ... if the player is already inside the editor. Because it does not fit in the forum? -->[player]*7618[/player]
Señor Ascenso | Mr. Lower Leagues
Top
Post Reply
42 posts