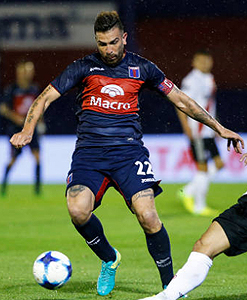 Vranny wrote:He was actually given No. 11 btw. It'll be interesting to see how he copes in the prem. At least Baines' crosses will have another good target to aim for.

Believe me, not it is a good striker. Do not be guided by the goals we did this last time (only in this last time, never before made ​​a lot of goals, actually had very low scoring average). He is a striker who has a high effectiveness scorer because he played on a computer (Club Atlético Tigre) than their 10 colleagues pointed to a header from the. Always looking for free kicks, corners, etc, look to it, nothing else. Not it is characterized by good technique, and sometimes it means "awkward" to respond to moves off guard. It has a very good balance to grab the ball, but is very slow when fetching a ball. I firmly believe that in the Premier League Stracqualursi fail miserably, because English football is totally the opposite characteristics. The english football is very fast, Stracqualursi is very slow. Not fit adapted ever.
Se sabe que el Sexto Grande está en La Quema,
se sabe que el Sexto Grande es
Huracán ♪
Top

Well, I don't agree Lucas, Stracqualursi may be isn't fast, but the speed hasn't to much to do with the football, if you're good, you'll be succesful. Or Berbatov and Crouch are fast? IMO he's more than a decent player, with nice response and heading; why say now that he'll be a fail? He has to adapt, it isn't easy. And in Tigre a lot of times he did the gameplay and made a definition. He's growing in his career and this opportunity could be nice for him and show his qualities.
Top

so, how stay doing in the PL? he plays?
THANKS FOR EVERYTHING, THERE WILL BE NOT ANOTHER LIKE YOU

xeneize wrote:so, how stay doing in the PL? he plays?

yeah, He played 2 games so far.

xeneize wrote:so, how stay doing in the PL? he plays?

yeah, He played 2 games so far.

It's going to be tough for him to get into the first XI anytime soon. Moyes always plays it ridiculously safe when it come to starting younger players. He's not getting opportunities off the bench either, as his arrival to the team has coincided with the development of our young striker Vellios, who's another strongly built foward in a similar mold to Stracqualursi.
Everton F.C.

he returned to Tigre? I can not find information about it.

I have started moving players who it has been confirmed are returning from loan because it is too much work to do them all at the same time in July :-
http://www.evertonfc.com/news/archive/2012/05/18/six-players-released
Top

.
Good debut, actually had a decent game, it seems more intelligent attack that past in Tigre, but less effective. Always chose the correct option for either a pass or dribble, which incidentally has a nice DA. Pivoting somewhat unstable, sometimes made ​​him well, but sometimes not, seemed weak and fell to the ground several times in the game. I could see this match is an excellent ball control, always controlled quickly and in some occasions with elegance, mainly elegy control with his chest. He made a great pass with the heel on the second goal, I trust that he wanted to make the pass and not forgetting the ball as can also be seen....

.
Very good body balance. Pressing the opponent constantly. Hardly had goal situations. Poor middle-distance shot. Great body balance pennant near the corner, covering the ball. Nice top speed, but unstable. Goal, his header was weak but effectively, almost stopper Pozo. Great pass with the heel of the foot to Piatti. Very smart in attack. He played as CF and had a goog game. My rating for him is 6.5/10.

Vs Vélez. Scored again. He's so alone in the offensive that his game isn't as good as could be. He has little support from his opponent, but he does a decent dirty work. He was fighting with Tobio and Domínguez the whole match, showing a really good body balance. He showed awful short passing but a decent dribble, without any speed.
Top

Vs Racing. He did not have even a goal situation. The first time they sent many crosses, but most were bad and were repulsed by the defenders. Lost most of the game in the passing game against Ortiz and Cahais, rarely could comb the ball or pivot. This game very very tame.

Vs Arsenal. He had a poor game, lost forever in the air with Lopez and Braghieri. He could not pivot ever, seemed very weak compared to CB's. The only thing to note is their sacrifice to retrieve the ball, but most was fouled. His short passes were very bad in general, some failed attempts of "tacos".
Top

Vs Quilmes. Without doubt one of the CF that most pressing to rival to retrieve the ball. and sacrificed more, maybe can be the low green in Tenacity. No longer the same of Tigre without doubt, although showing a 9 the class, is ineffective in definitions. Today lost a clear melee Tripodi, proving that sometimes it is not so tough.
Top

Spoiler: show
Attack: 80 · It's a little smarter than Pratto the box , but less effective today, should have the same value imo.

Defence: 45 · Goes back to retrieve the ball, although most of the time makes fouls, this above many CF's.

Header Accuracy: 84 · It is one of their main weapons, but it's not like in Tigre, I remember his headed goal was very lucky, almost blunder.


Dribble Accuracy: 76 · It is hard to see dribbling, but not that bad, below Ferreyra no doubt.

Ball Controll: 80 · What surprised me most, his ability to control the ball, especially with the chest.

The cards "Track Back"

i'mok with the numbers jorge decided, i also think his swerve and SA could go down 2 points each
"Imagine being this retarded @lucashag you fucking moron, you're seriously trying to write about football and think lingard is a bad player? you're a fucking disgrace, a fucking animal like very fucking south american moron" Relja's burner
Top

lucashag wrote:i'mok with the numbers jorge decided, i also think his swerve and SA could go down 2 points each

I think we can also reduce there, his current does not deserve a yellow.

vs Boca. Again not much danger genre in the game, just did a decent cross that ended in a goal, but I have doubts if aim to Mirabajes. There wasn't a lot of pressure as in other games but still ran something. His BB is below Schiavi apparently.

in the last two matches i notice that he doesn't use his left foot at all, when he has a shot with the left foot he always tries to enganchar to his right foot
"Imagine being this retarded @lucashag you fucking moron, you're seriously trying to write about football and think lingard is a bad player? you're a fucking disgrace, a fucking animal like very fucking south american moron" Relja's burner
Top

Vs All Boys. Scored 2 goals, one from penalty (well shoted) and the other one with a simple header. I don't like him as striker since he left Tigre, in England he was almost shit and in San Lorenzo he's showing an awful control of the ball, unagile as hell and he doesn't create so much danger by himself, he needs his teammates all the time to assist him. He doesn't move so much lately and waits for the ball. If you ask me, he isn't a 82 in attack at all nowadays.
Top

The efficiency greatly improved in last games, 5 goals in 6 games. I have these values ​​in mind.

Christian93 wrote:had a great tournament final, is a god 9, i like.