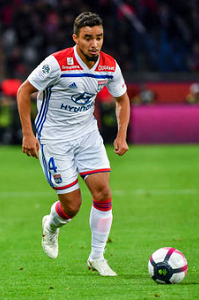 I understand your opinion, but, with all due respect, I don't like the logic

... This isn't a question of having his body formed or not, if he covers a huge amount of grass, and does not get tired, he should have a higher value on STA. If he becomes better when he gets older, so, he will deserve a better value. This had nothing to do with having the body formed or not IMO, I mean, I know a lot of guys that could be marathonist since they are teens and they haven't necessarily improved. If he has physical problems to last a match, is should be reflected on his Form, not on Stamina. If he becomes prone to errors at the end of the games, his problem is Mentality. Even with a 87 on Stamina, a so offensive side-back as him will be tired at the end of the games.

Anyways, I honestly like Paddy's set, I believe it's just a question of implementing the recently discussed values and it will be perfect IMO.
Top

I think 86-87 Is a good value. If there's something this boy has athleticism. I'm sorry tasmin but this time I do not agree with your reasoning

well i understand your explanation. but that's not all of stamina ! stamina is not all about covering huge amount of grass and question of getting tired it is also the endurance of a player in a full match !and considering that rafael should not get over 83-84 which is a top class value for a youngster like him !in a full match he is not the same in first 50 minutes and last 40 minutes! he gets tired , get less forward and made stupid fowls in the last period !that's because he tires up !that's because of his age ! he gives his maximum for a 20 years old and when his body will fully build up he will have higher stamina !also just consider his long runs with bale whose stamina is at 88.don't you think there should be at least 4-5 points difference !rafael covers good amount of grass in a long run but at the last of the run watch out his movements !he becomes more static and made mistakes ! either it is passing or shooting !that's the difference !i guess you got it !

pedala robinho wrote: if he covers a huge amount of grass, and does not get tired, he should have a higher value on STA.


actually that's also mentality !mentality is the commitment and drive of a player !at the last period he gets tired but still runs and tries to cover decent amounts of grass because of his mentality and agility !but actually he can't covered that grass and that's why he doesn't go forward as like in the early period and made stupid fowls !because he is tiring up !

pedala robinho wrote: I know a lot of guys that could be marathonist since they are teens and they haven't necessarily improved.

that's in case of physical problems of those guys ! but he is physically fit and without any accident he would get better and better as he already can run decent !
that's why i feel his stamina should go down and mentality could improve little ! also agility should go up !
The Game , you really doesn't need to be sorry for that ! i feel sorry for you as you don't try to realize my points

update him cuz I wnt to play him updated id PES

Btw person who creatd this topic wasn't loging in for year...
Top

You can put whatever you think fair In your PES. We won't call police

My stats are in first post and I'm the mod of the EPL, don't worry your sweet little heart.
Top What is it with this season and those type of images?
Top

That image Is Ok. Maxi Is enjoying It, Is that bad?

i think he don't deserve sliding card, being sent out two or three times and saving from sent out about 5 times because his late slidings.
Top

He's only been sent off twice in his career (I believe) and he wasn't red carded for a late sliding challenge.
Top

it was a late challenge in the match vs totenham, but yeah it's true, it have been two times, maybe is his lack of experience

He won the ball and was wrongly booked. For both challenges, in fact.
Top

First challenge his feet were over the ball and he lunged, arguably a red card in the current climate, and in regards to the second challenge he clearly clipped him and to the ref it looked like a foul, but it was an accident, he could have stayed on the field but Rafael will learn from it.
Top

The first one was indicative of the current climate that referees have created, Essien was sent of vs Fulham for "lunging studs up" into a tackle, but the thing was his studs ended up in the pitch no where near the player and he got all of the ball and none of the player......
Top

updated with some of paddys values
Top

His picture is of Fabio, BTW.
People gon' be people. They gon' lie, they gon' cheat, they gon' steal, but as long you get yours, you keep it moving.
Top

I know, its a little joke (and I was being lazy)
Top
Post Reply
193 posts