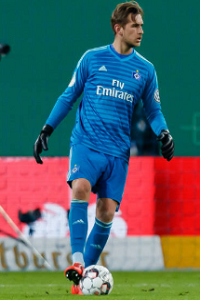 He seems to be a competent keeper for mid-table sides in 2. Buli, but not more.

As Heidenheim lost against already promoted Arminia Bielefeld, HSV only needed to home win against Sandhausen (already safe from relegation and even a prom/rel playoff spot), to have the chance to play a potential promotion in a eventual Nordderby (vs Bremen).

Well, HSV lost 1-5 against Sandhausen. Pollersbeck and his D-Line looked fairly amateurish, tactically loose and unable to stand the pressure.

Again, it I was a manager of a club pushing to go back to Buli asap as Hamburger, I would not rely on a goalkeeper as Pollersbeck for a whole season. He's not mentally strong enough to play big games, and he's not even good enough to justify his presence for the rest of the time.
Just decent response, but very weak parrying and handlibg overall to compete in a higher tier. And for being that tall, he looks extremely shaky when dealing with aerial delivery
"Willy Wanda is Chinese!!!"
Top

HSV lost their ticket to Play Off weeks ago. Honestly, lack of mentality was absurd. That tendency is normal in some teams in Germany, when they conceed a goal, their motivation goes downhill.
Better to die quick, fighting on your feet, than to live forever, begging on your knees!
Top

I'm very surprised actually, I did not expect him to join Lyon. He will be a backup GK because he is clearly not good enough to fight with Lopes for that GK spot. He is average, he used to play as a sort of sweeper-keeper. Maybe long passing could have a little decrease.
Better to die quick, fighting on your feet, than to live forever, begging on your knees!
Top
Post Reply
4 posts • Page 1 of 1