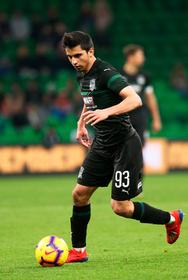 He is a more athletic iteration of the short, agile high body control player, with an aggressive spin. He is immature but very comprehensive of most aspects of an attacker and more often than not he feels like Krasnodar's most dangerous player when he is on. Solid shooter but tends to mishit the ball when off balance. He has a well rounded technical skill-set for his age and he will likely level up in everything once he improves his consistency, the skill is there.
Top Shapi is one of the discoveries of recent years in Russian football. The fact that he plays for the NT-U21, and not for the main NT one, should not be embarrassing - the head coach of the Russian NT Stanislav Cherchesov relies on players, as they say in Russia, such as "workhorses" (in the position of Magomed in the RUS NT previously played Samedov, now - Ionov). If earlier he was compared with Andrey Arshavin, now it is clearly seen that his manner of play reminds Arjen Robben (there is technique and dribbling (but not too outstanding) and, of course, the main feature - a shift from the right wing, part-time work under the left foot with the subsequent shot). Productive replacements in 18/19 season conquered many in Russia - it was even jokingly compared with Ole Gunnar Solskjaer. Despite the fact that from this season he began to come out more often in the main lineup, Suleymanov is still getting tired towards the end of the match, which can be explained by the fact that he is still young. Below are my suggestions for the player: