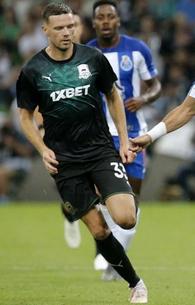 Sometimes, a striker needs to make the first goal to get in he's poachers-mode. But he simply isn't lucky this season.
This season is hard on him. But i'm shore he will score at least 13 goals next season no matter what, no matter where. I'll even bet on it hehe

Well he is (still) simply awful this season. He still seems to find opportunities for goal attempts but he is unlucky, too slow, lacks technique, or composure when he gets them..... These current stats are really way too generous for him in current shape.
Esp. ACC could be toned down. He is really slow, but sometimes can cover that up by decent RESP.
Top

had a lot of problems with injuries the last saison. Maybe IT C.

Sorry but from what if seen he is far away form this set. Mainly in ACC, ATT, Shooting, Technique, and the special abilities.
Maybe he can recover this saison he surely has chances to play. But for the moment he need a downgrade. I see him in SA over ST.

Maybe someone think thats it´s a bit harsh but with this set he is still an avarge Buli striker. And if he get back to old strengh we can always reupdate him.
Top

He had trouble directing his headers vs Panachaiki, had 3 clear chances and wasted all of them.
Visit my alt thread: http://pesstatsdatabase.com/viewtopic.php?f=1011&t=25348
Top

He maintains good speed over distance and his technique is better than that. Made some changes.
Visit my alt thread: http://pesstatsdatabase.com/viewtopic.php?f=1011&t=25348
Top

He had a good season. Most valuable player of PAO and one of the league's top scorers.
Visit my alt thread: http://pesstatsdatabase.com/viewtopic.php?f=1011&t=25348
Top

Whatch the goal he scored yesterday, perfect timing to kick the ball with left foot

some suggestions:
DA: 78, dunno if he deserves green, he is not good imo, i would give him the lowest from greens or 74.
BC: 1-2 points decrease
85 for BB seem very high.

DA 74 BC 79 sounds good. That should be enough for what he does the majority of time, hold possession a bit and pass it to a teammate. BB to 83 is the lowest I would go, I still see him one of the strongest CF in the league. He definitely knows how to use his body inside the box that sometimes he gives me the impression he is taller than 1.84 m.
I would increase TW to low greens, he connects well with the rest of the team, it's one of his strengths and maybe ST as well.
Top

bitz wrote:DA 74 BC 79 sounds good. That should be enough for what he does the majority of time, hold possession a bit and pass it to a teammate. BB to 83 is the lowest I would go, I still see him one of the strongest CF in the league. He definitely knows how to use his body inside the box that sometimes he gives me the impression he is taller than 1.84 m.
I would increase TW to low greens, he connects well with the rest of the team, it's one of his strengths and maybe ST as well.

Exactly same numbers and thouhgts in my mind.

i think his short passing may be underrated,whenever i have watched him he makes really accurate key passes and is great at distributing the ball ,he has not been playing a lot this season so haven't seen him too much lately. to be completely sure,your thoughts?
Top

Yes his passing is one of things that impressed me too

His attack at 82 is low,quite simply because he is great attacker.He is very intelligent upfront ,he knows were to be and is always there to receive the ball and make an attempt on goal or distribute the ball.His att should be at 84 at least ,85 would not be overkill .Lower league level in mind ,he needs to be represented properly,his attacking intelligence is what puts him in a higher class than every other attacker in the league.this suggestion might seem a little odd,since he is not at his best right now,its not the first time this happens,i suggest dropping his form to 5,maybe even 4.
Top

It might have been against the worst team in the league with substitutes,but 5 is still 5,impressive Mr Berg,feeling kinda sorry for the 16 year old keeper though,he was so disappointed he didn't even bother moving to catch Villafanez's cross

His SA should be raised to 83 ,he is absolutely clinical finishing ,it's a little odd how in 3 years he has not been the top scorer even once.
Top

He is the best striker by far. I would like to see his top abilities close to mid 80s, like Att Prow and Finishing
also he is better with left foot this year, more chances more goals.

For the rest I agree. Tried to be conservative with last update but I guess there's no reason to hold back. The gap between Almeida - Berg - Cardozo should finally close.
Top

He really shows off as a striker now with player to support him,even more than before,he doesn't have to drop back as much to be the play maker ,he seems like a real class
Fox in the Box right now.
Top

Brought his TW down a little ,probably the only thing that seems worse to me with the change in his role,is he is a little cut off from the rest of the team,and he isn't willing to drop back as much for one-twos and such,that shows off more when other important players like Ibarbo are not playing,where he seems less present during the game without the right players to support him.
Top
Post Reply
56 posts