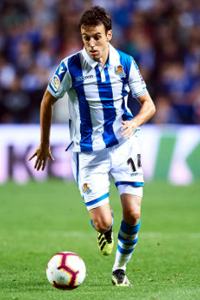 This guy's long passes are almost godly. I'd say that at least his LPS, for now, could sit around 88 or so, he's able to pull Xabi Alonso like long passes from his field up to the corner If he wants, he's done It really often

I don't know if he deserves 88 in LPS but the fans of Real Sociedad are comparing him with Xabi Alonso. He's a great surprise for the Basque team and he plays for U-19 Spanish NT. I don't know if he plays for U21... I'm not sure. He's better than Elustondo, Illarramendi and Aranburu (now retired). He'll be a starter in the team in 2012/13.
I said the same with Iñigo Martínez

Guy's really good. Nothing under LPA 85 as I see it. He favours a lot high passes over ground ones, probably because he's much more confident on the speed and range of the high ones... personally, I'd downgrade his SPS to greens, 77 maybe.

Other than that... ATT looks too low. He's a way, way better playmaker than anyone else in Real Sociedad, and no other midfielder in the team matches his game vision. He's a green to me, nothing under 75 and probably higher. Agree with current DEF value as while he's no specialist he looks like a pretty competent tackler as far as I've seen. Response is a bit overdone though, I see him as 75/76 at best.

Stamina, on the other hand... usually plays as a substitute and even then he mostly jogs around, we should give a low number, like 75 or so, maybe a white would be better. Also shows little to no speed off the ball so I'd suggest to downgrade TS to whites, while 76/77 could be enough for ACC. When on the ball he's more speedy so current DS is well deserved, I'd raise DA a point at least though.

Dunno to what extent current Header/Jump values are deserved, i've never seen him fighting for high balls in the midfield so he could probably use way lower values.

Mentality could be a bit lower, TW is ok.

Needs *Outside and probably *Talisman as well. He just changes the whole tempo and rythm of the team when he appears on the pitch, a real playmaker (unlike Illarra who seems too timid for my taste and unconfident of his ability).

What's with that guy's obsession of selling all those youngsters to the same teams this year or the next? lol

Shall we update him? Korinov?

Gave him a global update. We could start building a set from here on. Thoughts, Mr. Fixer?

why the low short passing? he's predominantly a long passer but he's had a nice share of through balls as well

I just applied the set I had in my OF... it's probably a bit outdated. Regarding short passing, you're probably right. I think Fixer has watched many Rsoc matches this season, so I'd like to hear his opinion as well.

Looks overall good. I'm however a fan of his long passing, it seems like he's better on LPS than 82 by a bit. I also suggested even higher for LPA, I'd really like a value near Beñat. Pardo has probably got a better accuracy than Beñat though, but an 87 would be nice.

Ah, I see you suggested a very high LPS value a while back... something like 88 LPA, 87 LPS, then? Any changes regarding short passing?