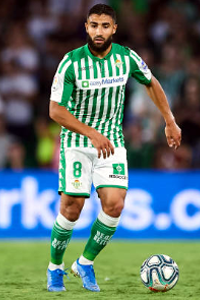 furymaker wrote:why is his passing so underrated? He is easily mid to high yellows in both LPA and SPA, he doesnt attempt many through balls, but he is incredible passer, and I would even argue that his DA can be even higher, 93ish and tech can go higher to almost orange values. Outstanding technically, he doesnt lack anything in his game, great shooter, great playmaker and probably 2nd best dribbler in la liga behind Messi, still crazy having him play for average la liga team when he can walk into any team in the world.

Lyon chairman said they had their Messi with him, before the injury

He was a good passer already, but nothing outstanding, so I guess it's something he currently improved. He had to adapt to a new role as he was earlier in his career (before his knee injury) someone very explosive, insanely fast on short range acceleration.
About DA and Tech, we gave him high value for Ligue 1. But he didn't played much at higher level (some great game in UCL like against City last year) but played mostly EL with Lyon. He was a substitute during the WC and didn't played much).

One year ago (or two ?) he pasted his medical visit at Liverpool, the deal was almost done, but their fear for his knee. Since he had this injury, it became a bit of a weakness I guess. This summer, he asked for another challenge, because staying in his confort zone at Lyon wouldn't make him keep improving. It seems it enjoying playing in la liga, better for technical player. He signed for Betis because not any bigger club asked for him this summer altough the door was open. But if he's doing such a great season, and prove his injury is past behind him, I guess he'll have some offer next summer.
They have eyes but cannot see; they have ears, but cannot hear; they have tongues, but cannot speak. They are like cattle.
Top

He's got some way to go. His performances vs Barça and Madrid were great and everyone saw them, but he's failed to deliver such level in other matches. It's true he's found himself having to track back a lot, and he should ever roam near the area, but he seems to switch off at times. Everything he does has a brilliant intent behind, it's clear he's an apex tier player, but he ain't gonna shine the way he's supposed to if he has the same regularity for any other possible team in the future as he has for Betis.

Well i disagree with you, he is great in almost every game he plays, he drops deep, starts attacks with progressive carrying of the ball or a progressive pass, in both of these categories he is among the best in the league, 10g+a in 22 games is kinda of a meh stat for him, but he doesnt find himself in big chances often either, missed 2 in the season so far..

And his consistency in play is backed up by all stat making sites as he is among 5 best top rated players in the league, Barca and Real just play more offensive than all other teams and that allows him to expose them to a higher level.

Canales is just as consistent in his performances, they are outstanding pair, everything goes through them, its like Lo Celso situation once again, but this time with Fekir.
Top

In the past he was inconsistent like Fixer described him and that's the reason for the form at 4. A bit like if he's choosing his game. Great against strong oppositions, and a bit less consistent against "small teams".
They have eyes but cannot see; they have ears, but cannot hear; they have tongues, but cannot speak. They are like cattle.
Top

Never understood why mods don't give him orange Ball control

He is technically way better than this

I see him similar to Dybala
Top

How does that look? any thoughts?

thats more like it, should definitely be paid attention to as he is quite amazing in most games, in others he is one of the best in the game, technically great, but sometimes canales takes the lead role in playmaking, but he has definitely made up for loss of Lo Celso
Top

furymaker wrote:thats more like it, should definitely be paid attention to as he is quite amazing in most games, in others he is one of the best in the game, technically great, but sometimes canales takes the lead role in playmaking, but he has definitely made up for loss of Lo Celso

I stll don't agree with that, he can do better. He's just really good by default.