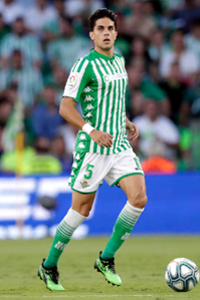 I'd like to see some convincing examples of a higher BB, because he's always looked quite weak to me, for a defender at least.

He has been impressive but not extraordinary. I do believe he warrants a low yellow defense since he is a clean and robust tackler. His short passing is not this good yet though imo, you do see him misplace them every now and then.
Top

This BB value is even generous lol.

I really feel like he's underrated . Every time I see him play he just proves he's really confident CB with good positioning , tackling , athletic ability overall ( not as strong as I'd like from my CB , but he makes it with speed and quickness ) .
I'll make some suggestions although I think this whole set needs work on most stats , I'll compare him mostly to Pique and base it on this season only , not on these past few games.
DEF - definitely should be low to mid yellows , every time he was called to play he does really well , Busquets sits at 82 , I'd say Bartra deserves at least that value , even today against Betis , his tackles were really good , and it's not only based on these past few games , he did so great earlier when he played on regular basis .
HEA- his heading ability is good , obviously much better than this 72 , he cleans a lot of crosses with ease , when watching him and Pique , honestly I dont think Pique is any better than him , easily mid green value .
RES - he's really aggressive when trying to get in front of attacker , he follows them almost to middle of the pitch and most of the times he gets in front because of his speed , although sometimes he just loses physical duel and he's left behind . 83 is decent value , but watching him he just seems to be more responsive than Pique , I dont know if its due to speed , but he's much more "aggressive" defender than Pique .
EP - his agility is really great for a CB , maybe it has something to do with his lack of weight , first thing on my mind was "he's just much more agile than Pique" , than I went on Pique thread and saw he is sitting at 60 EP , so really dont know is this value right or not , but among CBs , he's probably as good as you can be in terms of EP .
TS - easily above Pique , thats just so obvious , if Pique sits at 83 , Bartra can sit at same value , although I feel Pique needs a decrease . Batra's ACC is really good , when you watch him you cant really tell he's CB , today he had few runs with/against Cedrick , you really cant tell there's a 15 points difference , I mean , he's no high yellows ACC guy , but low-mid yellow is surely there .

Also this form 4 , I feel like he can sit at 5 , whole season whenever he was called to play , he played pretty well , even last season , there weren't any periods where he was great in one game and later so bad in other one . Solid performer whenever he plays .

He really needs this update , it was more than a year since last update and he really did improve in every aspect of his game except maybe BB .
Top

Pretty much agree with everything. He's kinda the opposite of Pique which is good. The problem is just that he's to green and weak. If Pique was more like Puyol: strong, dominant and controlling the backline, they would be the perfect match. Pique needs a strong and dominant cb with good positional play besides him to shine though. He's not the one who can have Bartra besides him and "raise" him, just like Puyi did with Pique. But if Bartra continues like this, they still could form a solid pair. I agree he really oushines Pique in agility, response, speed, courage and aerial ability. Overall a much more athletic player than Piqe (pique isnt even athletic). I would ad he has really nice DS too. He's able to maraud forward and be an extra attacking force. Bartra is just a badass CB

:/ Busquets has impressed me more when it comes to DEF than Bartra, still. He's good, and he keeps doing good once and again and I still think he's overrated by people.

Agree that busquets impresses more in def, but when Bartra goes for a tackle he does it cleanly and succesfully. Not far away imo.
Top

furymaker wrote:HEA- his heading ability is good , obviously much better than this 72 , he cleans a lot of crosses with ease , when watching him and Pique , honestly I dont think Pique is any better than him , easily mid green value .

Defensive heading efforts do not count towards rating Header.

I agree on some of your other points, although I have some doubts regarding TS comparisons with Piqué. There's been something really wrong with Piqué lately (by "lately" I mean months, maybe even the last few years) and I think it's mostly his defensive awareness... some days it's just terrible. I've seen many moments in which he could have easily kept attackers at bay by mere speed but instead chose to underestimate them and let themselves catch up with him, getting both him and the keeper into trouble. It happened very clearly in their last match against Valencia. I don't really think Bartra is above him TS-wise, the problem is how to rate Piqué. Is he still an 83 TS? Most of the time I'd say he isn't... but then there're moments in which he is. So in the end we just leave him be, and put him on a really low Form value. Maybe that's the core issue... this season Bartra could easily be Form 6, he's been fairly consistant in his performances, even if I agree with Fixer that he's not been any extraordinary. But Piqué shouldn't be over 4.

that kind of proves my point about his header , he's very capable header , also there's video of his speed next to bale on bale's thread .
Top

Are furymaker and me the only ones who can tell this guy is fucking awesome? We've been noticing this the whole season, not just today.
Speed stats, DEF, HEA are stats that doesn't show what he can do. He should be a starter long ago
Top

i wouldn't say he's awesome , he's solid , better than this set suggest , small but well deserved update is needed , also i agree , he should be playing much more than he is .
Top

I'd really like to know what's wrong with his current speed stats. I'd also like to see here some examples (videos, gifs, whatever) of convincing displays of tackling/marking ability that warrant a yellow DEF value.

Other than that, that was a pretty fine header.

also i dont want to point out anything in these videos since those are his best moments this season .
You have some really nice standing tackles , sliding tackles , really nice displays of his ability on the ball , his positioning , as well as his speed . I cant really tell is he good solid CB or he just looks so good because he plays next to awful CB's in Barca this season . When he plays he looks so solid , no stupid mistakes , good positioning , calm and fast .
Again , I repeat myself , I dont say he's awesome and he deserve massive upgrades like Varane did last season , I'm saying he improved in every aspect of his game , he's even bit stronger than last season ( although being stronger than last season is not really a problem ) .
Top

Why form 4 he deserves 5 now evereything has changed on him and u know it, also stamina 81 he lasts a complete match
Sorry for my english
Top

Can anyone update him please ? He hasn't been updated since 1 year ago. I think he has improved now and his black time has past
Top

I think he improves a lot.
Top

I also think he needs an update, he was better than Pique and Mathieu against PSG, he saved Barca THREE times in a row after Pique and Mathieu totally screw it all against Lucas Moura. I think he is faster, the difference between him and Pique cant be only 1 point. 82-83 will be good for him. Also form has to be 5 (he is even more consistent than Pique), and mentality in greens, he seems to be really focus during the matches.
Top

honestly i don't think that was an amazing performance by him.. just from that video i wouldn't put his defence over greens still, 79 at most. I watched verratti, and that was an impressive defensive performance, if you look at verratti's tackling and defensive ability, its far ahead of bartra.

Pique is technically sound, but he's so unathletic that he makes really pathetic unforced errors, like when he had the ball and just tried to turn against madrid, but lost it due to his lack of agility. Maybe pique needs to go down though anyways.
If you don't put effort into your post, i won't put effort in my response.
Top
Post Reply
74 posts