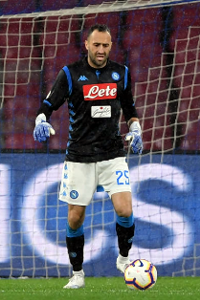 David Ospina has the highest winning percentage in the history of the Premier League.

Ospina is very well ranked in the frame, replacing Wojciech Szczesny, after that incident in the shower (pole caught Smoking). David Ospina catches almost any balls.

This affected the results of the team. With Ospina Arsenal have won 11 matches out of 12, representing 92% of victories. It is the largest index teams that have played more than 10 matches.

Also, the Colombian 6 clean sheets, given the fact that he only played 12 games. It seems to me that if he was standing from the very beginning, he could take the lead on this indicator in the Premier League.
Top

Pulled of a pretty good double save vs Argentina in Copa America.

Another great save. He's having an unbelievable game tonight.

He steps up his game in adversity, I'd put his Tenacity in the 83-85 range.
Top

I wonder why Arsenal will leave him go, he's such a great keeper. Also at NT he has been really impressive every time I watched him.
Top

he ain't great keeper, he makes way too many mistakes, barely an upgrade on sczzzzzzney
Top

awful mistake, not even sure it was a goal anyway
Bloody Curse!
Top

it's a goal ,they showed it in btsports afterwards,its over the line
Top

Is he the best sub GK in the world?
Top

His handling has been particularly poor since the last 12 months or so.

Mostly underwhelming performances in the few chances he's got to play for Arsenal recently. But his last two matches for Colombia NT couldn't be worse. Shaky as heck, not really determined as he used to be when rushing out, and parrying in a random pattern... The lack of first team football at Arsenal is really affecting him atm. If he wants to get fit prior to the upcoming WC, he needs to search for greener pastures in January 2018...

His Form is barely a 4, and I seriously doubt regarding orange values on Keeper Skills atm.
"Willy Wanda is Chinese!!!"
Top

didnt know him from his previous club, but at arsenal he never striked me as an orange GK, nor even good at positioning, not at all. He does some great 1 on 1 duels but that is all, i find his 89 response is well deserved, but i doubt about his defence. thoughts?
Bloody Curse!
Top

when he first arrived at arsenal, i was really impressed with his gks. he had some super showings, for nt and club. funny enough arsenal went years without a good enough gk and they finally picked up a decent one, and then got cech right away as well. the last 2 years i think he's just been gradually regressing, with not enough playing time. with colombia i see some super saves still, oblak like, and so i'm not sure if it's gks that is his weakness, rather maybe ospina should have his defence lowered, and maybe mentality/form as well?

i'm not too sure now as i've also seen the mistakes ospina has made so i understand how you could see his gks as less worthy, i do think at some point he deserved orange gks though.
If you don't put effort into your post, i won't put effort in my response.
Top
Post Reply
38 posts