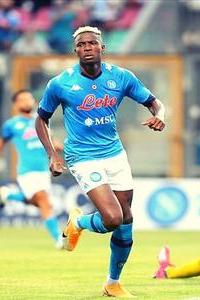 Great starting of season for him. Nice scorer but too much limited as a football player. He's great when launch, so much space, nice timing on his runs behind center back too. He's also pretty good into the box, having some scoring instinct, and physical presence. But well, in the game he's just useless, not any supportive movements, incredibly bad on the ball. He can't run his body and when he's just touching the ball he pushing it 2meters far away every time he tried to make two touch. He's still young and has time to improve that technical areas, at least it can be worst. But his pace, aerial plays, and scoring instinct, are really promissing and could make him soon a forward called bi bigger club.
They have eyes but cannot see; they have ears, but cannot hear; they have tongues, but cannot speak. They are like cattle.
Top

Could not his DA/Tech be worse then, if he "useless", especially for a 20 year old? Same TW could be lower if "not any supportive movements".
Top

That's my current feeling and impression but need to see more of him to be sure. The set been worked by someone else before so might get some reasons for the value. And I didn't seen enough to be sore of my view on this. But it could be and idea indeed.
They have eyes but cannot see; they have ears, but cannot hear; they have tongues, but cannot speak. They are like cattle.
Top

I partly share your impressions about him... Yes, just to a certain extent.
You see, I don't think he's exactly has huge technical lacklusters. He actually gives me more the impression of being a striker who's not really smart at using all his skills and traits wisely. So he will tend to attempt first touch shots when it is not the best option, and the same applies for overdribbling or not holding up the ball when his team needs to keep ball posession upfront. Overall, he has limited football intelligence, so his performances heavily rely in a matter of casualties. On the other side, I like the way he puts some intensive pressing upfront, disturbing the opp D-Line and forcing it to commit nonsense mistakes. It is easier to see it against mid-low tables sides from Ligue 1 with a tight, cohesive, narrow D-Lines which are not that technically good overall.

That said, he's not an ordinary CF poacher but more like a mildly high energy striker, capable of pressing upfront to lead opp to defensive mistakes, but also someone who lacks the sense to make the best decisions in the final third, and not really composed when it comes to finish one-on-one chances despite being a nominal CF.

His technical stats are well replicated overall; I'd give a slightly higher DA, but that's just a personal preference.
What he surely needs is DEF at mid-high 40s, Aw 3/2, slightly higher Stamina and possibly replacing Goal Poacher with Track Back. Tw looks a bit better, around low 70s.
"Willy Wanda is Chinese!!!"
Top

Immediately a great impact on Napoli, we must keep an eye on him, he already seems to deserve an update.
Top I just gone through some of his goals in France. He's definetely a very high agg player, most likely even for oranges. He's always trying to get the ball into space, and attacks it pretty well. His RES is also, definetely higher than 79.

Speaking of his shooting, the best part is how quickly he adapts his body for shooting, and especially when recieving the ball in left-halfspace, moving the ball to his right quickly, it's impressive. He so rarely uses his left foot, 19 out of his 20 last goals (including friendlies for Napoli) were scored with his right foot, only one with his left, and most of his attempts with his left are fucking disgusting. He seems a decent finisher, ST is interesting, scored some nice, nice chips and one or two impressive volleys, but SA seems very raw, with impressive KP.

His technical stats, he literally never uses his BC, like never. If offering himself in build up, he'll just play simple one touch pass, or try flicks, and most of the time he'll try and knock the ball past opponent with his first touch. Not only because of his raw touch, but because of his rare usage, he can easily go down to 60's when it comes to BC, like, Duvan Zapata's got what, 65, and he at least sometimes try some traps, and he's capable of some pretty decent ones, while this guy is just not even trying to fucking recieve and hold the ball up.

Same goes with DA, i don't even know why he's in 70'. The guy's the ultimate kicker and runner, no close control virtually. And yeah, back to shooting, his HA, it also can just go down to 70's, none of his 20 goals were scored with his HA, but i also had a look, decent, decent number of his head shots, just dozens of awful examples, his movement is good and he attacks the ball well, but connections are just incredibly shit at moments.


This set is just weirdly balanced, it underrates him in some aspects but also compensate it with some really high and overrated areas. Like, it would be pretty safe to give him something around 83-85 RES, 90 AGG, mid yellow ACC, higher KP, low yellow ST, and one-touch play and dribbling, the latterfor his ability to create spaces for shots quickly, and then really, really knocking his technical stats down to mid lower 60's, and maybe even going even lower with his HA for the start, but not really sure about that, altough i am sure that he doesn't deserve more than 76 ATM.
It's me, Relja. Live and in stereo.
Top

I don't think he's that badly rated stat-wise when it comes to his technical skills. Set aside his Ball Control, which should be knocked down a bit, the current set is fair enough with his technical lackstrure: Awkward on the ball most of the time, and below-par passing skills. After all, if we exclude his scoring instinct, he has very little to offer for Napoli when it comes to the attacking phase; his end up product is trash and the set stresses it well enough.

However, as I stated in a previous post, his defensive pressing is quite below the radar. He's not great in that regard; obviously not Luis Suárez's quality for that particular point. Still, he's more than competent when it comes to press opp defenders, specially sidebacks. He knows he's both pacy and powerful enough to cause chaos with that pressing, and that's a really helpful skill which managers should start considering to give Osimhen some extra value besides being a mere goalscorer. Well, that's what I recall from his time at Lille, and while he probably didn't show that tendency in his first matches at Napoli, I really hope he starts doing it more often in the future. Otherwise, he will heavily struggle to keep self-confidence every time he will face a goal draught.

Here's the little vid that i've made, it's pretty basic and short but it shows some important details.

I agree Osimhen has little to offer during positional play, he can attack depth and notice empty spaces, but still, the margine between his transitional play and positional play is huge. Apart from being a presence that occupies attention in the box, and, there and there some ok 1 touch pass or flick, he is pretty much useles. He never holds the ball up, and yeah, his passing is still sub-par.

Napoli, with Petagna, who's technically good, and a fantastic link man with great hold up play and above-average passing skills and vision for a striker, can have completely different dimension, and even though that's unlikely to happen, Petagna - Osimhen would be a pretty good duo.
It's me, Relja. Live and in stereo.
Top

scary pace. always playing with his back to the door and always available to receive the ball. decent trapping. great sp as already noticed before. he's like a mix of Cavani and Mbappé. Terrific prospect.
Top

Epsi, can you plase elaborate BC this high, because you obviously don't know him if you think he's anywhere around yellows. The guy doesn't even use his BC, he's playing one touch most of the time, i am genuinely scared that you gave him 80 BC due to that pretty basic chest trap before yesterday's goal.
It's me, Relja. Live and in stereo.
Top

some traps against atalanta

https://youtu.be/zK2MlOrdcBo?t=159 the one of the goal, but yeah not excellent, hard to say it's BASIC TRAP CHEST though

https://youtu.be/zK2MlOrdcBo?t=213 this one really convinced me to give higher tech, insane chest control