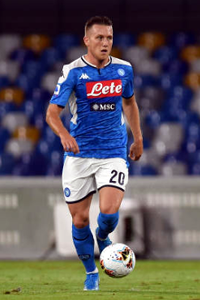 https://streamable.com/4yoy0 - near the end of vid you can see close up.

(Don't have access to a real vid editor atm and could not find one online, sorry about lengthy celebration, don't like those in highlights)
Top In Poland NT he is often uselless on defending corner kicks. Lost cover or lost physical clash, and by this few goals.
Top

Well he does have Header and Jump in the 60's...maybe a bit lower would be better..after all he's the Polish Xavi

He does not really seem to be terribly effective in the defensive phase in open play either, both for Poland and Napoli.

On that goal vs Montenegro it was Krychowiak's error, he headed the ball high and back onto goal and then the line collapsed deep, you had Kuba and Grosicki waiting to spring a counter attack so doing nothing to defend, Lewa was deep with Glik as these two are the only other good aerial players..even Pazdan ain't that good winning headers, Piszczek and Berezynski are just decent ... really there are only 3 players any good in the air on the team. Zielinski struggling was funny.

edit
Rybus was on for Piszczek, haha that guy is mostly useless, Poland were playing with a handicap when defending with Rybus.
Top

I have not been watching Napoli, but I still try to follow them via highlights, match reports - has Zielinski been playing in the LWF Insigne normally plays, lately?

He now already has 6 goals this season, as much as he got all last season, and in fewer games - hopefully this trend continues into the summer.
Top

Oriello wrote:I have not been watching Napoli, but I still try to follow them via highlights, match reports - has Zielinski been playing in the LWF Insigne normally plays, lately?

He now already has 6 goals this season, as much as he got all last season, and in fewer games - hopefully this trend continues into the summer.

to me, he's a class player, will take Hamsik's place easily once Marek will suffer decline and eventually retire...
his class is huge, his da is surely better as well as his attacking intelligence. his passing is also worth of mid yellow values, especially short pass.
he looks to me faster on long distances, more of speed 83 acc 76. another note is that I feel he's more "heavy" in his movements, even though he has a great ball retention thanks to his da. his agility should be around 76 imho.
tw and shooting stats could also get a boost.
Top

The vs clips I could find from this season;

https://www.youtube.com/watch?v=r25PIUN4gKE -- played left wing and was ineffective, he plays better when the field is in front of him and he has space to run into or players to play in on goal. He finds himself boxed-in high on the wing, does not really take players on 1-vs-1 and he does not know how to cross well, does not see the angles nor does he have intuitive bio-mechanics -- meaning the muscle memory and body form to just ping in a good cross.


At least juve managed not to lose at home in Europe....