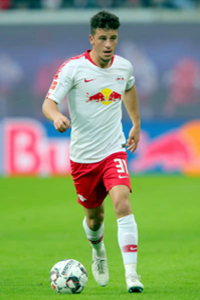 Don't you guys think that his main position should be DMF ? Also , he looks more of a fighter than "74" to me and i think that his ball winning needs to be raised a bit cause despite the fact that he makes lots of fouls , he is quite good at recovering the ball

He's a great example of a ATT<DEF; the latter being around 72 or 73. His Aw is more like 2/3 while still w Box to Box. *Covering seems to be a must. I have some doubts about his AGI being as high as this. I still see Kampl as fairly more agile than Demme, not just a single point.
"Willy Wanda is Chinese!!!"
Top

To back up what Keyser said last year, he’s been really good in the defensive duties for RB this year providing cover for the attacking players and making sure they aren’t exposed when caught out of possession higher up the field. Defense is definitely better but agi seems rather high. He’s giving the squad proper balance and an essential figure.
Top

Been following him enough to make some suggestions for this set . Firstly , his STA should be raised to oranges . He is one of the players who covers the most distance in BL and yesterday against Bayern he was running like crazy and made like 13 km . He is so important in the midfield of Leipzig , keeping the balance and also he's much more of a fighter than this set suggests so i think that his TEN and DEF should have a raise . And the last things are AGI which looks a bit overrated to me and from what i have noticed his DA is not that good , maybe low greens can represent his style better .
Top
Post Reply
6 posts • Page 1 of 1