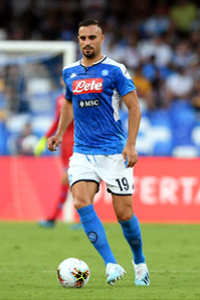 VUKDS wrote:Updated for now.
For Header, he doesn't often goes to opponent's area after corners, but even when he does he doesn't try his shot with head.
Technique, he shows decent first touch, 73/74, we will see after few games. And Jump, it could be higher too, I would go for 81, he's great in the air.

Headrer does not count for attack only. His main asset and precision in defence is playing with his head...
http://www.fcradnicki-nis.com/
FK Radnički Niš Stadium Reconstruction : http://www.youtube.com/watch?v=mVC8KPA70hM
Top

But still, he is in national team...

Updated him for now.

But still, he is in national team...

Strong manager, Ramadani or Zahavi, I'm not sure ?

he has already done the medical visits with Torino
Top

Those stats are two years old , and at that time he was awful in Red Star , but he is now standard player in Torino FC , which is much better club than Red Star.... Does he need update??? Also i think DMF can be added to be secondary position...
Top

Add SB as his secondary position, he has been playing there for a number of weeks. His speed and dribbling stats, as well as stamina also needs update, he's not that slow at all
Top

Epsi, do you have any ideas for his set??? He is much better now than in Red Star, where he was useless.
Top

He is not slow and unagile like stats say.
Top

What is the point in giving him SMF position and leaving with stats like a tree?
He is CB and maybe plays SB in Torino, but no way he plays SMF.
Nenad Tomovic plays sb/wb for Fiorentina and is very useful in attacking, but he didnt get SMF and Maksimovic did?! No logic at all, unless someone shows me a video of Maksimovic playing as SMF.
Shollym Patch PES6:

Shollym wrote:What is the point in giving him SMF position and leaving with stats like a tree?
He is CB and maybe plays SB in Torino, but no way he plays SMF.
Nenad Tomovic plays sb/wb for Fiorentina and is very useful in attacking, but he didnt get SMF and Maksimovic did?! No logic at all, unless someone shows me a video of Maksimovic playing as SMF.

I can't get your complaint at all. First, he doesn't have stats "like a tree" like you're claiming, and if so, I've never touched them so it's a matter of who did this set before me. Then, SMF* is actually a WB* position, as the newest PES games don't include the latter anymore so every position on the side of the midfield, even wing backs, play actually SMFs. About stats, I just managed to see him live once, and I can say that he doesn't look so physically better than the current stats, just something more in agility, but really nothing worth of a look.

Get things better before accusing so scornfully.
Top

I forgot you dont have WB in newer pes games, anyway it is awfully wrong to just add position without changing stats, he got these stats while playing CB in Serbian league.
I dont think anyone normal would use player with these stats in SMF (or WB) position, but AI maybe would, so you can imagine how it would affect gameplay if a player like this is used in side position?
Shollym Patch PES6:

I was right, he doesnt play WB (or SMF), he plays only CB in 3 5 2 formation, WB on right side is Bruno Peres.
http://www.football-lineups.com/team/To ... paign/?p=2
He may occupy RB position like CBs do in this formation, but no way he plays WB (SMF) so that position needs to be removed.
Shollym Patch PES6:

He used to play wb/sm since he joined Torino last season http://www.football-lineups.com/footballer/37290/
Top

He plays both roles. Sometimes WB/SMF and sometimes CB
3-5-2 formation indeed. Positions should stay, with some stats updates
Top

I highly recommend agility raise.Somewhere around 73-74.Also DS needs update,i suggest 72.Def and teamwork should also go up.Stats here are those wich he had in serbia,and he was really shit and unmovable.He is now much more smarter and is moving well on the field.
Top

In Red Star he was slow and strong, typical CB, now he is more mobile, reliable, there is improvement no doubt...
But someone needs to "convert that" to numbers