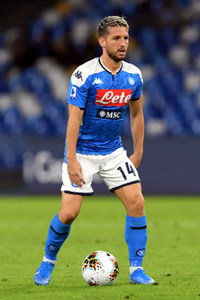 Not really, he's a very promising young player (mainly because of the type of player he is, they're rare nowadays) but he still needs some time to mature and show his best I believe. Hopefully, I'll be proven wrong by the end of season because I am very charmed by his abilities and style of play.
Buon compleanno, il pibe d'oro.
Top

P12 – Incisive Run would be suitable for him?
Top

fantastic young talent and someone who stuck out in the games vs Steaua. I think his 1st touch could easily be a 84 or something as the ball is almost glued to his feet but its really up to you since i didnt see too much of him.

This guy is brilliant!
I think side should be: both.
Top

So a few suggested changes lined up:

Personally, I've also got some suggestions.

FKA: 80 --> His free kicks have been quite impressive so far this season, often going on target when they're in range. He's also scored a few I believe.

Condition/Fitness: 7 --> He never looks tired really and has been playing a long string of games now, as Utrecht started their European qualifiers quite early in the season. Also played nearly all of Utrecht's games in 2009/2010.

Consistency: 7 --> Always among Utrecht's top performers and rarely if ever has an off-day. He's generally always there to be seen.
Buon compleanno, il pibe d'oro.
Top

Updated him according to some suggestions:)

Changed his default position to WF because he general position is left winger this season I think.
Top

This guy is the same every year. He starts out the season great...but after the winter break he starts to fade away more and more.... I guess his fitness is just not that good to deserve 7.
Top

Finished of the season in style scoring 3 goals. Still think he is quite inconsistent and he can turn "lazy" if he isnt motivated enough.
Top

Updated his stats a little bit. Lowered his MENT/TW/STA, and raised his DA with 1.
Top

This is crap, how can PSV afford to buy him?? Their financial situation is total crap.
Top

Having a great start at PSV. Till now he was influential in all PSV goals this season. 3 goals and 1 assist and 1 rebound of him shot.
Top

Well his goals are usually not made by positioning huh? But yeah, if he continues like this (meaning he would score 40 goals), yes. I guess every player with 25+ goals in a half decent league will inevitibly get an ATT: 80+ rating:P Personally I feel his shooting is really good. Probably better then almost all Eredivisie strikers. He combines good SA, ST and SP...
Top
Post Reply
114 posts